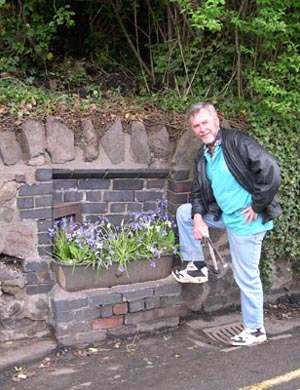 Location: Worcester Road, at the junction with North Malvern Road and a spring watering hole high on North Hill
Description: an iron basin and tap built into the wall with a well nearby. Also a spring water pool near the summit of the hill.
In early 1867 articles appeared in the Malvern Advertiser lamenting that there were no cattle and donkey fountains or horse troughs at the cab stands dotted around the town and something should be done about it. Cab men were not allowed to leave their horses unattended even momentarily so a ready supply of drinking water for cabmen and their charges was urgently required. A year later the Advertiser noted that 'The town at present is deficient in its supply of water, but we may hope shortly that the new arrangements will remove any hindrance to the erection of cattle fountains.' [1]

Being made of iron Osborne's was probably installed before 1870, perhaps as a result of the newspaper's observation. Until 1870 many troughs were made of iron, but this proved too brittle and zinc-lined timber became the norm. This too proved susceptible to damage and eventually granite proved to be the most durable material for troughs. A 6-inch main was laid along this section of the Worcester Road in 1898, and the tap on the basin and the fountain's proximity to the public conveniences suggest that it was latterly fed from the public mains. Prior to that Osborne's Fountain was probably fed from the Police Station Well. This adds confirmation to the date of c.1870.

Immediately to the south of Osborne's Fountain was a 19th century cab stand and water was needed for the horses. You can still see the slabs of an earlier urinal for the use of cab drivers. It is said that before the urinal was built they had popped across the road to use the toilet at the police station opposite.

The welfare of animals gave rise to much concern and public discussion in Malvern in the past. In the Malvern Advertiser of 28 Feb 1867 a letter commented that although a new fountain was being planned as a memorial to Dr Wilson, nothing in the way of cattle fountains were being planned for cattle and donkeys during the summer months. 'Want of water may have been pleaded as an objection, but this will, we trust, be obviated under newly proposed arrangements.' Cab men were not allowed to leave their horses unattended even momentarily so a ready supply of drinking water for the animals was necessary to prevent suffering. On 8 March 1867 the Advertiser noted that 'The town at present is deficient in its supply of water, but we may hope shortly that the new arrangements will remove any hindrance to the erection of cattle fountains, which exist in London in connection with every cab stand, and we believe in most if not all our large towns.'

It was some time before an adequate water supply and animal fountains were provided but there was much individual concern and anxiety for the protection and safety of animals. The Malvern Society for the Prevention of Cruelty to Animals, established in 1875, was responsible for promoting humane feelings towards animals. Its work included organising essay competitions on the subject in schools, prosecuting anyone found ill-treating an animal and giving lectures on kindness to animals, emphasising the fact that much cruelty was done through ignorance and a useful cure would be the study of natural history.[2] The Malvern Society, recognising the value of The Metropolitan Free Drinking Fountain Association's initiatives in providing drinking water facilities, similarly began to provide cattle, horse and dog troughs throughout the Malvern Hills. The Metropolitan Association in 1867 changed its name to The Metropolitan Drinking Fountain and Cattle Trough Association. Even today the Association is still very active, particularly in supplying water fountains in school playgrounds and parks.

In 1904, a year of drought, Osborne's Fountain was improved to cater for the town's smaller animals: 'The influence of the MSPCA seems to be at work in Malvern. The drinking trough opposite the police station has now received an addition in the shape of a trough for dogs, and the way that the canine tribe make for it shows how it is appreciated. Formerly the dogs had to scramble up to the horses trough with the result that the little dogs got none'.[3] This later addition has now disappeared; only the horse trough remains but water has not flowed into it for many years and the tap has ceased to function.

William Osborne Thorpe succeeded Mr Maybury as Town Surveyor in the opening years of the twentieth century. He was responsible for finding a new prolific source of water for Malvern. Not wishing to interfere with the springs and wells that had given Malvern its reputation as a health resort he proposed boring into the red sandstone at Bromsberrow, to the south of the hills. Land was purchased in 1904 and by 1906 the pumping station and over 5 miles of piping to British Camp was in situ. By the official opening in March the new prolific supply was rapidly proving to be the solution to Malvern's long term water supply problems.[4]

Osborne went on to have a long career with the Malvern Council and his other engineering achievements included the underground tunnel beneath the West Malvern Road at St James's, the girl's college at West Malvern. He designed the pedestrian tunnel, which was opened by Lady and Lord Baden-Powell in October and November 1930. Osborne the architect was given three hearty cheers.[5] The tunnel included a piped spring water supply to the college.

Osborne also ran the Meteorological Station and gave published updates on the local weather, particularly the rainfall.  In 1934 he comments on the records collected over the previous 40 years for Malvern's weather, and compares recent events. December 1933 set up a record with less that half an inch of rain and November and December combined set a record for the two driest consecutive months since 1896. December will also go on record as one of the coldest months, "a record unlikely to be broken this century". Other activities included his role with the Malvern Council Benefit Society where he was elected Vice-President in January 1937.[10]

Police Station Well - The old police station is immediately opposite Osborne's Fountain and is now incorporated in a modern development. On the south wall the barred windows of the cells were still visible until recently. Richardson in 1930 identifies the Police Station Well as being 123 feet deep and penetrating the Keuper Marls.[6] This well is believed to be beneath the pavement a few yards south of Osborne's Fountain on the same side of the road, in the `V' of the road junction. The urinal toilet was similarly positioned.

In 1883, the well had an engine and shed. Earlier in the 1870s, during the water shortages caused by the building of the new Tank reservoir, water was pumped from the Police Station Well up to North Malvern.[7] A pump was also located here that supplied the Gents urinal toilet, later replaced by a two storey toilet block that was scheduled to be extended in 1926.[8]

St Werstan Award - In the year 2005 the St Werstan Award was initiated by the Friends of Malvern Springs and Wells. The Award is a public recognition of outstanding endeavour in the conservation or renovation of Malvern springs and wells and their immediate environment. Julie and Roger Moss, who restyled Penny Cottage, formerly the public convenience adjacent to Osborne Fountain, received the first award as a result of their conversion. In January 2006, the hand cast brass plaque was presented by Mr Jim Fox of Malvern Natural Mineral Water and reflected their support for environmental issues. When first purchased the old toilets were derelict with the ladies and gents separated on different floors. Had the building been demolished and the site redeveloped it is likely that Osbornes Fountain would have been under serious threat. Now it is reasonably secure in the boundary wall.[9]  The award plaque can be seen above the north door of this charming residence.

This water feature has been erroneously called Trinity in recent years. There is no long term history of such naming and the site has no religious connections.
The High Spring watering hole on North Hill 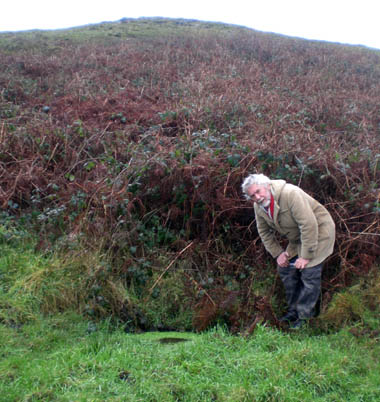 High above Osborne's Fountain lies a clue to the source of water for these lower level water features. About fifty feet from the summit of North Hill mountain there is a spring water pool that acts as a watering point for local livestock grazing the hills. It comprises a pool about one foot in depth fed by near surface run-off. This water then overflows forming a muddy area below the pool before it disappears into the scrub and the surface soil. We can speculate that it then percolates downhill, eventually emerging to supply Osborne's Fountain and other local water features. The pool is about seven feet in diameter and enjoys spectacular views of the landscape to the north-east,
To find the watering hole climb the paths above the Lodge Fountain accessing from the steps in the drive. Zig zag your way up the hill until about 50 feet from the summit where you will discover the pool in the undergrowth, Use the view of the aerial mast near the steps to keep your bearings,
Illustrations:
1. Dr Bruce Osborne of Friends of Malvern Springs and Wells admires the bluebells where there was once water.
2. Within a stone's throw of the top of North Hill, Bruce Osborne inspects the highest known water source on the Malvern Hills, the High Spring watering hole.
Footnotes:
[1] Malvern Advertiser, 8 March 1867.
[2] Malvern Advertiser, 17 May 1879.
[3] Malvern Gazette, 5 August 1904.
[4] Weaver and Osborne (1994) Aquae Malvernensis, p.197-204.
[5] Baird A (1956) I Was There, St James's West Malvern, p.387.
[6] Richardson L. (1930) Wells and Springs of Worcestershire, HMSO, p.116.
[7] Malvern Advertiser 24 Nov. 1883.
[8] Minutes Malvern Urban District Council 2 February 1926.
[9] Friends of Malvern Springs and Wells Newsletter 12 Jan. 2006.
[10] Malvern Gazette, 13 Jan.1934 and 9 Jan.1937. 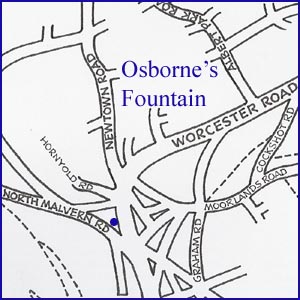