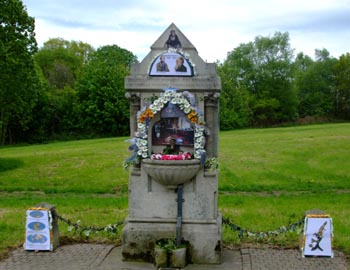 Location: on the Worcester Road, Malvern Link, on the edge of the common just west of the railway bridge.
Description: a substantial dressed stone drinking fountain.

In May 1899 Miss Gertude Lakin, Hon. Sec. of the Malvern branch of the British Women's Temperance League, asked Malvern Urban District Council if it would supply free mains water to a drinking fountain the League was planning to erect on the common near the railway station.[1] Since the 1870s mains water in Malvern had been metered, so free water was a special concession. The Council's minutes for 31 July 1900 record that Miss lakin's request was granted and just a month later the elaborate edifice was in situ. The inscription on the fountain indicates its origins: 'Erected by the Members and Friends of the British Women's Temperance Association 1900.' It was handsomely carved by W. Forsyth of Worcester who had also executed the marble spout and basin which was installed at St Ann's Well in 1892.[2]

In the 1920s and '30s local people and visitors arriving by bus, coach and train, drank here. The water was dispensed from a push-button above the basin but in those days there was no cup and chain to drink from. People brought picnics to the adjacent common and the children bought lemon fizz tablets - 10 for 2d - and added them to the water to make a refreshing drink. The fountain was said to be still in working order by the early 1950s but, like many public fountains throughout the country, was probably cut off c.1952 through the fear of water-borne poliomyelitis.

Restoration - The fountain was refurbished in 1999. Two side pillars were added and water reinstated from the public main. A square brass plaque behind the spout reads: 'Whosoever will, let him take of the water of life freely'. (From Revelations 21:6) Freezing in winter and vandalism are occasional problems but the fountain now provides a useful amenity to those walking on the common.

Across the road from the Temperance Fountain is one of Malvern's mid nineteenth century pillar boxes. In 1857 Mr Cross of Great Malvern post office asked the Local Board to provide three ornamental pillar boxes in Malvern. The request was granted and later that year the boxes were cast in Birmingham and installed in the town.[5] There are only four surviving of this type, three of which are in Malvern.

The Metropolitan Drinking Fountain and Cattle Trough Association was an association set up in London by Samuel Gurney an MP and philanthropist and Edward Thomas Wakefield, a barrister in 1859 to provide free drinking water. Samuel Gurney (1816 - 1882) was the nephew of Elizabeth Fry and MP for Penrhyn and Falmouth, Originally called the Metropolitan Free Drinking Fountain Association it changed its name to include cattle troughs in 1867, to also support animal welfare. It was linked to the Temperance Movement believing that the provision of drinking water would reduce drunkenness and misbehaviour'

The strategy of the Association was to provide pure, cold water sources for all classes, particularly the poor, in answer to the almost unanswerable question of how to provide sufficient drinking water for the swiftly burgeoning city populations. The Association built 85 fountains in its first two years. The first fountain was opened in London, at St Sepulchre's, just two weeks after the Association's conception. It was used by more than 7000 people daily.

The Temperance Movement held annual festivals in Malvern to promote their ideals of abstinence and the work ethic to the working classes. The Advertiser of 4 August 1860 records such a festival on 31 July, the day's events including lectures, meetings, games and band music.

Just prior to the annual festival the Malvern Advertiser of 9 June 1860 carried editorial advocating the setting up of public fountains:

"A nobler conception never entered the mind of man than the idea of supplying to the weary wayfarer in the crowded streets or dusty cities an abundance of pure cold water...There is no purpose that a drinking fountain would fulfil in London and other cities, for which it is not needful and desirable..." and the article continues that fountains could be used: "As a fitting ornament to the place; as an object of general and benevolent interest; as a laudable expression of our public spirit...; as an effective contribution to the health and refreshment of our working men; as a charitable boon to the poor wayfarer in his transit through the town; as a dissuasive to habits of intemperance amongst the frequenters of our public houses, and as securing to the thirsty man the power of choice between a draught of water and a draught of beer. Malvern demands it and anticipates a Public Drinking Fountain."

In spite of their high ideals, the Temperance Movement arguably failed to bring about a regeneration of the working class. The reason was that the cause was not that of drink draining the pockets of the working classes. John Graham, philanthropist of Croydon penned the following in 1870: 'Is not drunkenness the result of something else? Suppose the poor man to have a neat, well-ordered home, clean and well-ventilated, an industrious, thrifty wife, well-behaved and well-taught children, would not the public-house loose many of its attractions for him; and as the children of such a house grew up, would they not in their turn have better regulated households?'[6] No doubt the debate will continue as we experience town centre drunkenness on Saturday nights throughout England in the 21st century. 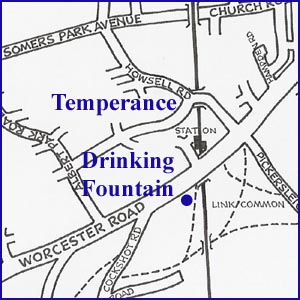 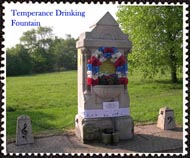