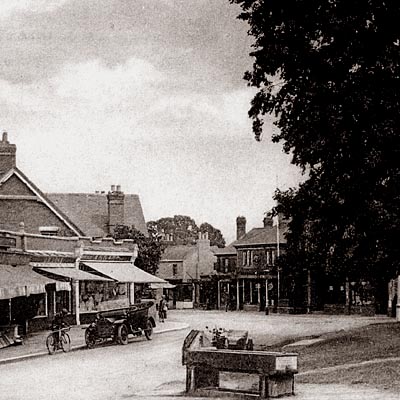 Location: junction of Guarlford Road and Hall Green
Description: a stone animal trough with a drinking fountain at one end.

During 1900 reports of the progress of the Boer War reached England. There were tales of courage and catastrophe, victory and vanquishing. The only form of transport was the horse, so from farms and stables throughout the country thousands of valuable and much-loved horses were shipped out to Africa and many were wounded or killed. This was a time when many people loved animals as much as they loved their children. There had been a huge outcry in Malvern following legislation by the Board of Agriculture that dogs should be muzzled to prevent the spread of rabies; dog owners refused to comply with the law. Horses were especially well-loved, and the depth of sentiment felt by their use in war was summarised in a letter by Sir Edward Elgar in 1914 -

"Concerning the war I say nothing - the only thing that wrings my heart & soul is the thought of the horses - oh! my beloved animals - the men - and women can go to hell - but my horses; - I walk round & round this room cursing God for allowing dumb brutes to be tortured - let Him kill his human beings...".[1]

At the end of July 1900 Malvern Urban District Council received a letter from R W Pound, Hon Sec of the Malvern Society for the Prevention of Cruelty to Animals -

'...It was the horse that saved the Empire after the gloomy days of baffled tactics at Magersfontein and Spion Kop. It was the horse that relieved Kimberley, and gained Bloemfontein...Generals French and Hutton have done wonders, but only with the aid of the noblest of animals...'.[2]

Mr Pound then detailed a scheme for erecting a monument to the fallen horses, proposing a trough and fountain at Six Ways, the junction of six roads in Barnards Green. He appealed for donations. In August 1901 this trough and fountain was erected by the M S P C A beside the road on Twelve Apostles Island at Barnards Green. It comprised a human drinking fountain, a cattle and horse trough, and an under-trough for dogs. Along the side was the lettering 'MSPCA 1901' and a further inscription on the end read, 'In grateful memory of the faithful services of the horses of South Africa 1900 and 1901.' Carved of Forest of Dean stone it bears the maker's inscription, A W Ursall of Ross.

The drinking trough was officially unveiled in some style on Saturday 28 September 1901. Bannerets were festooned across the road and two boys dressed in sailor uniforms carried flags. During his speech Mr Pound reported a conversation he had overheard a few days earlier between two workmen.

The memorial was unveiled by Mrs Barlow of Barnards Green House. She was a solicitor's wife but also Hon. Sec of the Malvern Primrose League and Hon. Sec of the Poolbrook Industrial Society. She unveiled with the words,


"I now declare the drinking trough to be the property of the M S P C A, by the free gift of the subscribers, to be protected and kept in good order, and dedicate it henceforth to the use of the public, for the good of man and beast."[3]

Miss Emma Onslow, another lady of ample means and very involved in helping the poor, then turned on the tap. She declared, "I hereby open a way for the precious gift of God to flow down from the everlasting hills, and from henceforward to replenish this trough for the good of man and beast".[4] While the trough was filling up from the public main, the vicar of Christ Church, Rev F W Davenport ,read 2 Kings iii, v.17 which proclaims,

"For thus saith the Lord, Ye shall not see wind, neither shall ye see rain; yet that valley shall be filled with water, that ye may drink, both ye, and your cattle, and your beasts."

Two letters were then read from members of the late Imperial Yeomanry who were unable to attend but who were delighted both with the memorial and the conduct of the horses in battle.

Towards the end of October 1949 a war memorial clock and bus shelter was erected at Six Ways. Unfortunately the cattle and sheep belonging to commoners wandered all over the road and loitered at the trough, thus holding up the buses. The bus drivers complained. The town Surveyor was then instructed to remove the trough.[5] Instead of putting into the Council store the trough was re-erected at the junction of Hall Green and Guarlford Road, and the necessary water connections made. Water engineer Cliff Whalley remembered doing the job in 1950. The trough was supplied from the public main and at one time was metered with a ball valve regulating the flow.

Like many public water features throughout the country, the water was cut off in the early 1950s as a possible carrier of polio. At that time polio was the scourge of the country, and left many children dead or crippled for life.

By 1995 some of the stonework was damaged and in a precarious state. Unlike the Wilson Memorial Fountain, which was demolished, it was saved by the prompt action of the Malvern Hills Conservators, on whose land it lies. The Conservators ensure that it remains in a reasonable state, and the trough was enhanced in 2008 when the incised end panel was replaced with Heritage Lottery funding.

Much of the pipe work is missing or damaged and the trough can look quite forlorn, but it is uplifted once a year for the annual well decorating. In 2013, Team Trough won the St Werstan Founders Prize for their 'Once Upon a Time' decoration of Barnard's Green Trough, Hall Green. 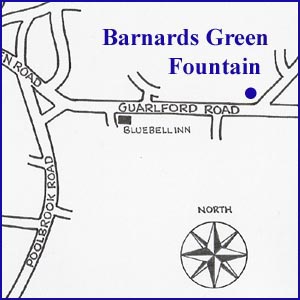