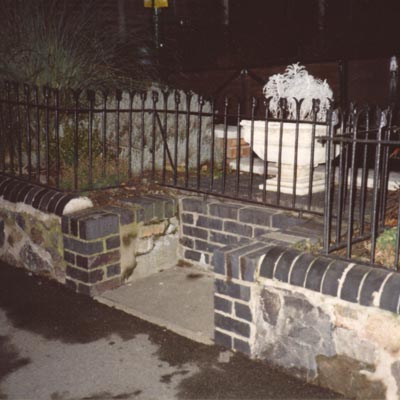 Location: outside 'Glenhurst' at the junction of Clarence Road and Court Road.
Description: site of a spout and animal trough

The animal trough that used to stand here was fed with water from a cistern in the Rushey Valley, high up on the hillside. From the cistern, a 6 inch main carried the water down to the 15 inch main that runs along the Wells Road. From there it flowed eastward through a 3 inch iron main to this trough and the Court Road Spout. This was once a bustling street of workers' cottages, and at one time the trough was well-used by horses. The Malvern Extension Plan of 1892 shows a trough on this site.[1]

By the 1940s it must have become a bit tired, worn and mucky, because a Court Road resident asked the Malvern Hills Conservators to remove it. They declined, but asked the ranger to make sure that it stayed clean. 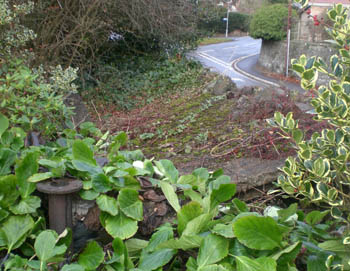 Illustration left: There is a covered structure in the garden of 34 Clarence Road that, judging from the similarity of iron inspection covers which identify the original Malvern Water Company, is linked with Poolend Spout. Looking at both the field evidence and historic documentation, it appears to be the water header tank for the former spout. It is a straight downhill line to the original position of the spout from the tank going under the railway bridge.Clarence Road was formerly Mill Lane and included one or more mills fed by spring water from the hills. This water would have been contained in a pipe line that fed the header tank, ensuring a reservoir supply for the spout when it was in use.
The Poolend spout and trough were finally dismantled in the 1980s and for some time the vacant site was used as a bus stop seat. For several years the site of the animal trough was discernible from the inset in the wall and railings, but these were removed in 1996 and it is now difficult to see the precise spot where the trough once was.

There was another puzzling spout in the vicinity. The 1927 OS map shows a spout at the rear of Clumber Cottage in Court Road. This has possibly disappeared over time. Associated with it is an unusual cistern that still exists in what was once the orchard behind the The Cavalry Arms, now The Morgan pub in Clarence Road. The square, brickwork open top cistern once fed the now disappeared spout and was once part of a spring water containment that was piped downhill, supplying several residences in this way.

1. Poolend spout site before the removal of the inset.
2. The cistern in what was once the orchard.
3. The header tank in Clarence Road 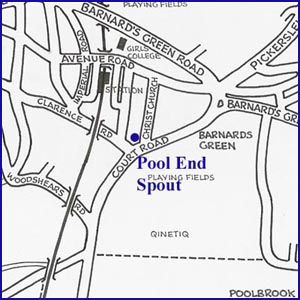 The map alongside is a small section of our more comprehensive map of the area. For the complete map together with description and history of this site see "Celebrated Springs of the Malvern Hills" (2012).
Click on Website below or the top banner to go to the DISCOVERY TRAIL INDEX of springs and wells.