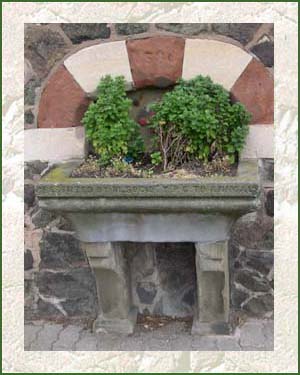 Location: Great Malvern Railway Station, near the entrance to the booking office.
Description: a spout and animal trough

The animal trough is situated on the west wall of the station buildings, a few metres to the right of the original ticket hall, and was intended for the use of horses carrying visitors by carriage to and from the station. Erected in 1880 the inscription reads 'Presented by the M. Society P.C to Animals'. The Malvern Society for the Prevention of Cruelty to Animals was founded in 1875 and provided other animal troughs in and around the town. It also gave lectures on kindness to animals, emphasizing the fact that much cruelty was perpetrated through ignorance that be overcome through the study of natural history.[1]

In 1852, a gushing spring was unexpectedly discovered during excavations to build a railway tunnel through the Malvern Hills.[2] The water was piped as far as Malvern Link through a 6 inch gravity main that ran alongside the railway track, and this supplied the animal trough. The water was not controlled by a push button, but flowed freely from the spout. One irate resident probably thought that the water was coming from the depleted public main, and sent the following letter to the local newspaper in 1906, the third successive drought year.

'Sir - Knowing as we all do that water is not abundant in Malvern, I and others are surprised at the waste of water at the Station drinking fountain. There certainly should be a tap to turn the water on and off as it is required. This is not the only place where water runs to waste.' [3]

This main was abandoned in the 1920s in favour of the public main, which also provided unchlorinated hills water. The pumps in the tunnel were scrapped at this time.[4] The animal trough is now dry. The tunnel supply is still in the trackside main, under pressure.

Great Malvern Station - The first train ran through the station on 13th September 1861. The station was designed by Edmund Wallace Elmslie, who also designed the nearby Imperial Hotel (now Malvern St James School) and the Worm, a unique tunnel connecting the two buildings. Of particular interest on the Worcester line is a unique display of painted foliage-headed columns, a Victorian wall-mounted letter box, and Lady Foley's Tearoom. Crossing through the subway to the Hereford line one can see one end of the Worm. 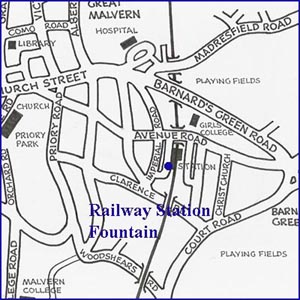