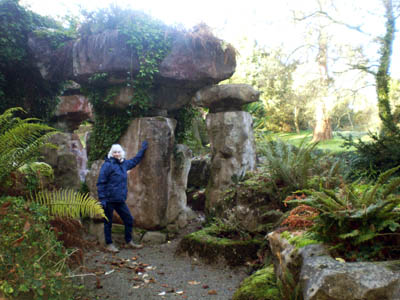 Location: Madresfield Court estate at Madresfield, to the south of Malvern Link.
Description: a pool of water in a grotto within the extensive rock garden.
This well has gone largely unrecognised as an important Malvern water feature for many years. The water from Lord Sandys' Spout flows to the nearby estate of the Earls Beauchamp, Madresfield Court. Here it refreshes the moat and it is here that the Dropping Well can be found in a grotto.
In Madresfield Court grounds there is a magnificent rock garden that was commissioned by the fifth Lord Beauchamp in 1876. It was installed by Pulhams of Broxbourne, one of the leading landscape companies at the time and it became one of their masterpieces. This impressive creation is built on three levels and stands thirty feet high in places. It was built entirely of Pulhamite, a man made stone made famous by the installation company and used extensively for such prestigious projects. The rock garden at Madresfield is probably the most elaborate of their many surviving creations. 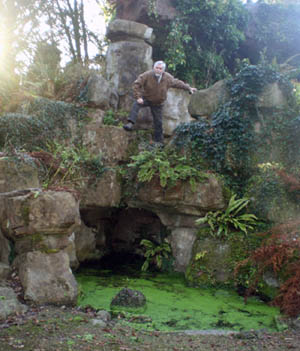 There are several distinctive signature features at Maderrfield that can be found in other Pulham landscapes. On the right as you climb the steps within the garden, a stone bears a face that looks out for others approaching. Also in a narrow crevice near the entrance there is an inscription which identifies the date and workmen involved in constructing the rock garden. "This work by Mr J Pulham, Broxbourne, AD 1878-79, R Pegram, Boss, J Stracey, J Jonson, Fini July 18."

The sheer scale of the works is impressive with towering archways that span the paths through the gorges. At the foot of the central section in the gorge the Dropping Well is located. It is half concealed in a cave or grotto and makes a water feature that enhances the overall appeal of the rockwork. This work was all carried out in 1878/9, being completed in July. The entirety survives in excellent order and  water continues to flow in the grotto.
Picture right - exploring the Dropping Well and grotto. (click for a larger image)
The Dropping Well can be seen in the centre of the picture above which was taken recently. Other water features at Madresfield include the Mercury Fountain, in the formal gardens by the house. Unfortunately the statue of Mercury has disappeared for safety reasons but the fountain pool and ornamental stonework survive. This is also believed to be a feature that Pulhams installed. 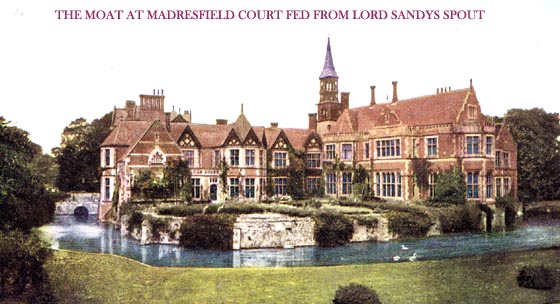 footpath/track leads east, dividing the northern section of the estate from the main gardens and house. Two footbridges cross the track and the rock garden is on the northern side near the bridges.

Further Reading: Hitching C (2012) Rock Landscapes, Garden Art Press.
Click on Website below or the top banner to go to the DISCOVERY TRAIL INDEX of springs and wells.
Click the rock breaker right to find out more about Pulhamite and its legacy. Madresfield is included in the book Rock Landscapes advertised.

On Private Property
Not Open To Public
Open Set Times Only