Springs, Spouts, Fountains and Wells of the River Wandle - 8 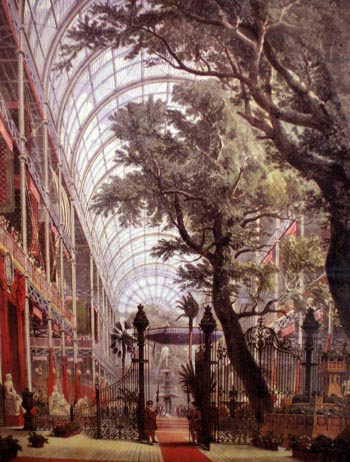 In the late eighteenth century, Johann Jacob Schweppe (1740-1821), developed a method of manufacturing carbonated mineral water, based on a process discovered by Joseph Priestley. This led to the founding of the Schweppes Company in 1783. The iconic 'Schweppes fountain' trade mark dates back to The Great Exhibition of 1851 which was held at the famous Crystal Palace in London's Hyde Park. The centrepiece of the exhibition was a spectacular crystal fountain made from 4 tons of glass built on a frame of silvered metal. Specifically designed to showcase the allure of the legendary 'fountain of youth', the 27 foot fountain delighted visitors with a sparkling flow of Schweppes Malvern Soda Water. When the exhibition was opened by Queen Victoria the fountain was the centrepiece of the opening ceremony. 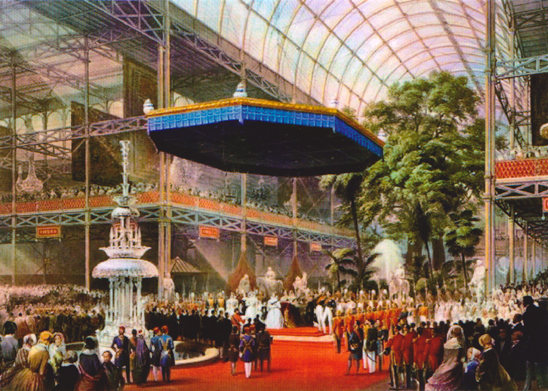 The Great Exhibition sometimes referred to as the Crystal Palace Exhibition in reference to the temporary but massive glass and iron structure in which it was held, was an international exhibition that took place in Hyde Park, London, from 1 May to 11 October 1851. Prince Albert, Queen Victoria's consort, was an enthusiastic promoter and Queen Victoria and her family visited three times. The British exhibits at the Great Exhibition were deemed to hold the lead in almost every field where strength, durability, utility and quality were concerned, whether in iron and steel, machinery or textiles. With the Great Exhibition, Great Britain hoped to show that technology, particularly its own, was the key to a better future.  The stunning Crystal Palace was built to house the show. It was designed by Joseph Paxton with support from structural engineer Charles Fox, the committee overseeing its construction including Isambard Kingdom Brunel, and went from its organisation to the grand opening in just nine months. 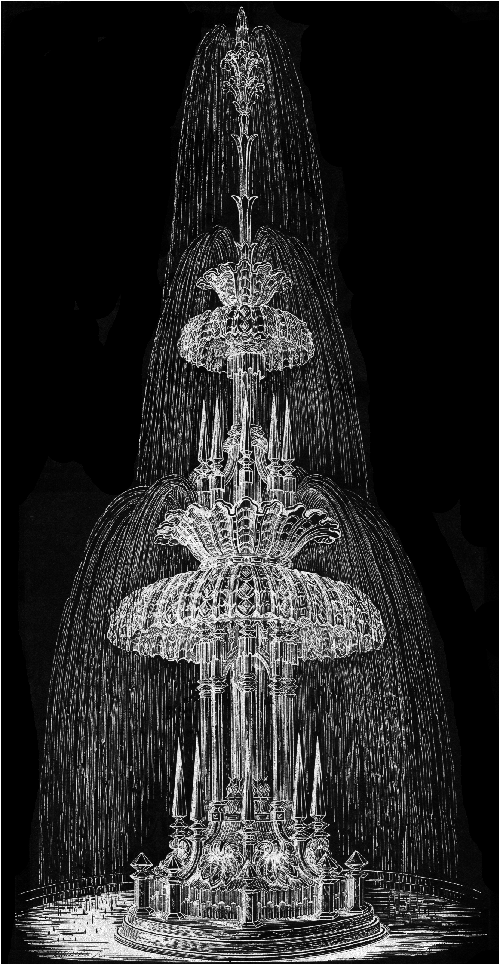 F & C Osler of London and Birmingham, were the leading makers of chandeliers and lighting during the nineteenth century. The glass works were founded by Thomas Osler in 1807 in Birmingham and specialised in glass furniture and chandeliers for the overseas market. The firm was commissioned by Schweppes to make a giant crystal fountain for the 1851 Great Exhibition in Hyde Park. The fountain stood some 8.25 meters or 27 feet high and contained 4,000 kilograms or 4 tons of crystal. The original catalogue of the exhibition makes particular note of how this magnificent glass fountain dominated the entrance: 'Forming the centre and, or nearly so, of the entire building, and dividing alike the transept and the nave, rises the gigantic fountain of Messrs. Osler, the culminating point of view from every quarter of the building...' The brochure also goes on to say that the fountain is perhaps the most striking object in the Exhibition; the lightness and beauty, as well as the perfect novelty of its design, have rendered it the theme of admiration with all visitors.

For Schweppes, a company that was leading the world with its advances in the development of bottled waters and soft drinks, this was a superb opportunity to promote their products.  The most significant of all Malvern water bottlers was Schweppes and the Great Exhibition meant that Malvern became a household name.  In 1850, Schweppes started operations in Malvern town centre using natural spring water from the hills in time for the 1851 Great Exhibition, where their new brand of bottled water was first launched. It was called Malvern Soda Water. In 1856 production switched to Malvern Holy Well and the brand name was changed to Malvern Seltzer Water, after the German mineral water from Selters, which is naturally carbonated. One of the greatest attractions at the Great Exhibition was the magnificent Schweppes' fountain, which was then adopted as the company's trade mark. Schweppes also bottled soda water, potash and magnesia waters, lemonade and Malvern lime water.

As the 19th century and Schweppes progressed, the Malvern Holy Well bottling works was too small and product distribution was difficult. In 1892 Schweppes constructed a purpose built manufactory at Colwall in the Malvern Hills, adjacent to the railway line. The factory was supplied with water from the Glenwood Spring, which was owned by the Ballard family of Colwall. Schweppes drilled for their own source at Colwall, but after reaching a depth of 9 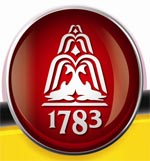 78 feet found only weak brine in modest quantities. This they marketed for a few years under the Britannis label.
In 1927, Schweppes took over the Malvern firm of W & J Burrow. This gave them the rights to the Pewtriss Spring which, for aesthetic reasons, was renamed Primeswell.
About this time, the late Sir Henry Thompson, the eminent Surgeon, wrote: For those who can afford to buy bottled Waters, NO PURER EXISTS to any natural source than that of our own Malvern Springs, and these are aerated and provided in the form of Soda and Potash Waters of EXCEPTIONAL QUALITY. Certainly it is wholly unnecessary to import Waters for any use of the table from foreign sources. No foreign Waters of ANY KIND WHATEVER are so pure or so cheap. 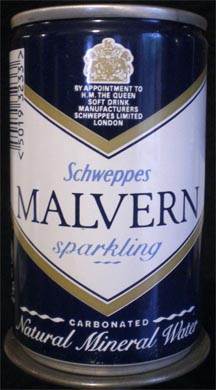 Schweppes began bottling Malvern Water from the Primeswell in 1929. The spring yielded a modest maximum of 48 million litres of water per annum. Only about half of this found its way into bottles. In 1987, Coca-Cola Enterprises took over from Cadbury Schweppes as the proprietors of the factory and the brand. In 1992, the original 2- mile pipeline from the Primeswell to Colwall was replaced. The spring continued to supply the factory, and the factory supplied the monarchy. Burrows had held royal warrants of appointment to Princess Mary Adelaide in 1895, to King George V in 1911, and later to King George VI.  Schweppes, whose brand name always appeared on the bottle labels, continued to serve the monarchy with Malvern water until 2010.
In October 2010, Coca-Cola Enterprises announced that they were closing the Colwall factory. For 23 years they had worked with the local community. employing about two dozen people.  The company had perpetuated the historic Malvern water bottling tradition, the brand name, the Royal Appointment and the vintage bottling works. After 160 years of bottling Malvern waters, the closure was a major loss to the local heritage and economy. 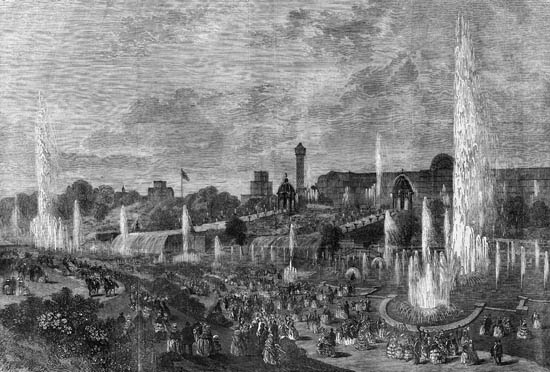 After the Great Exhibition in Hyde Park, The Crystal Palace was relocated to South London where, atop Westow Hill, it overlooked the valley of the Norbury Brook and River Graveney, which in turn flow into the River Wandle. In the surrounding park lands were sited numerous water features and fountains, many of which survive to this day. The spectacular glass fountain was relocated to the interior of the re-erected Palace where it was sited with a taller base in the south transept. Here it continued to stun visitors to Crystal Palace until in 1936 the main building burnt down.  The 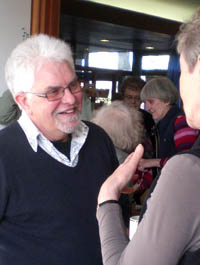 collapsing roof destroyed the fountain and apart from broken artefacts collected at the time and pictures, it was no more.

4. A Victorian Schweppes bottle with the Royal coat of arms. 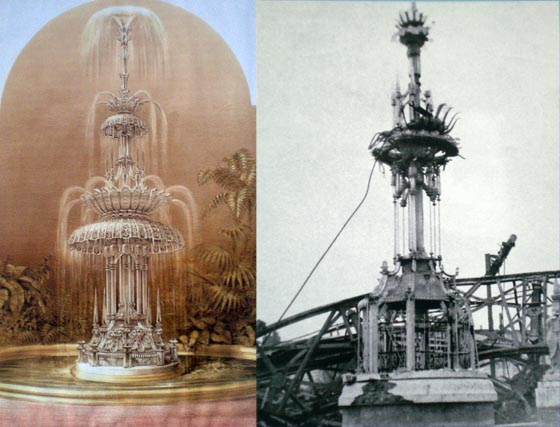 London mayor Boris Johnson has welcomed plans for a 500 million pounds investment to rebuild The Crystal Palace and restore the surrounding public park. Chinese developer ZhongRong Group plans to rebuild The Crystal Palace. The Chinese investment group announced its plans at a launch event with the mayor and the leader of Bromley Council, Stephen Carr. ZhongRong Group chairman Ni Zhaoxing said: 'London is renowned across the world for its history and culture and the former Crystal Palace is celebrated in China as a magnificent achievement'.

The proposals for Crystal Palace include the full restoration of the park, based on the original Victorian design, through new landscaping, planting and a central tree-lined boulevard. Improved access, lighting and a new cafe, visitor centre and restored concert bowl, are also included in the proposals.

The original Crystal Palace was designed by Joseph Paxton for the 1851 Great Exhibition in Hyde Park. The innovative Palace was the largest glass structure in the world before being destroyed by a fire. 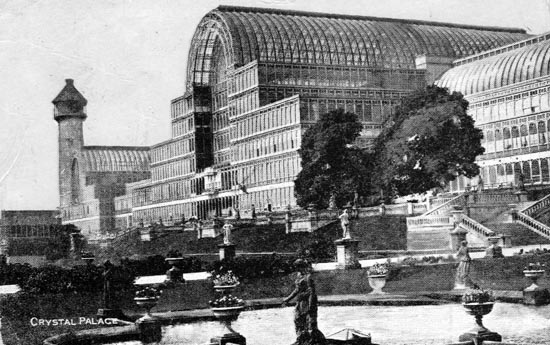 Boris Johnson is to chair a board of experts who will advise on the design of the palace and surrounding park. Other board members include special adviser to Prince Charles Hank Dittmar, Eden Project co-founder Sir Tim Smit and London Design Festival chairman Sir John Sorrell CBE. Johnson said the advisory board will establish core design principles, which will guide the appointment of an architect to work with the board to ensure the plans are of the highest quality, sympathetic to this much-loved heritage site and fit for the 21st century.
ZhongRong has submitted a request for an exclusivity agreement to Bromley Council as landowner. A planning application could be submitted in autumn 2014 ahead of work starting on site in winter 2015.
Click below to go to the project web site.

INDEX OF LOCALITIES
Click the titles to go to the details of the Springs, Spouts and Fountains associated with the River Wandle in that locality.