Springs, Spouts, Fountains and Wells of the River Wandle - 4

The Graveney takes its name from the Gravenal family of the twelfth and thirteenth centuries. The Norbury Brook and the River Graveney, into which the brook flows, is a significant tributary of the River Wandle. In the 18th century it rose at Addiscombe, east of Croydon. From here the stream flowed north to the Selhurst area and on through Thornton Heath and Norbury Park. It then swings west crossing under what is now the A23 London Road near the railway bridge at Norbury. The river then skirts Pollards Hill. It eventually finds its way through Tooting, entering the River Wandle near Merton Mills. The name derives from the De Gravenel family who once owned what is now Tooting Graveney. Today the course is much altered as a result of building and road development and rarely can be descibed as beautiful. 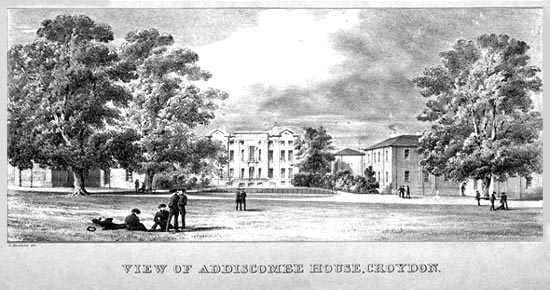 The start of the Norbury Brook in the eighteenth century was in the grounds of Addiscombe Place, which was later famous for being the Military Seminary of the East India Company. The house itself and estate was a former grand mansion dating from 1702 when it was rebuilt by the Draper family. In the eighteenth century the brook originated as two ponds on the northern side of the estate and, being fed by spring water, would have been an important water suppy for the mansion. On the nineteenth century estate map of the Military College and grounds published in 1894, the larger pond is shown as a substantial elongated rectangular feature on the north side and immediately 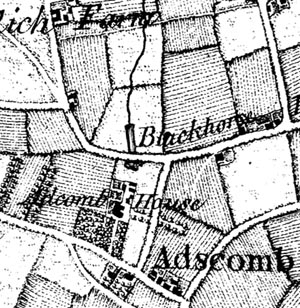 adjacent to the Croydon-Beckenham Road. It is labelled 'Coldstream'. This was where cadets from the college once bathed and is now called Academy Gardens.
To view the 1894 estate map click on the picture above. The earlier 1793 map  (see "1. General Synopsis " below) shows both ponds either side of the road, the second smaller one on the south side. This is the Addiscombe Place side of the road. This siting and layout agrees with Rocpue's 1768 map of Surrey (reproduced left) confirming that the water features predate the Military Seminary. The accurate location of the source spring itself can be ascertained from the Seminary estate plan where the 'Brewery' is identified. Such a process required considerable quantities of good water. It would therefore have been located over, or very near the spring.
The Seminary was opened in 1809 and closed in 1861 when the land was redeveloped for housing. Addiscombe House ended up in Mulberry Lane and its garden contained the stump of a Mulberry tree - the first ever imported into England by Peter the Great who stayed there. Peter the Great was born in 1672 and he died in 1725. Peter I was tsar of Russia from 1682 to 1725. The East India Company came to an end with the Indian Mutiny of 1857, and Addiscombe House was eventually demolished although Mulberry Lane survives to this day.

By the twentieth century this part of Addiscombe was extensively developed with housing and other amenities such as the railway to Bingham Halt from Woodside. where it joined the main line. The spring and the Norbury Brook was lost as a surface feature not appearing until the massive railway junction at Selhurst adjacent to Heavers Meadow, now an interesting wet land open to the public. There is a clue however to the whereabouts of the Norbury Brook in Moorland Road. R White's mineral water bottling works were based on the south side of Moorland Road, between the footpath to Dalmally Road and Amberley Grove. This is on the line of the historic brook and the company would have required a plentiful supply of water for their soft drink manufactory. What is known is that a 350 foot well was bored in 1896 on the site and this penetrated the chalk aquifer. The well would have supplemented the works supply with it's yield of 4200 gallons an hour.
In the picture above, cadets relax in front of Addiscombe House; it is believed that the Mulberry Tree is that on the left of the picture by the house.
Picture right - was this the fate of the Addiscombe House spring water in the 20th century? 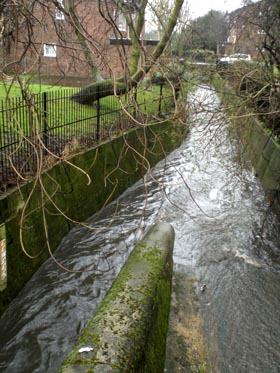 Picture left: The Norbury Brook after it flows under the A23 at Norbury.
NORBURY PARK
The park was created in 1935 and contains the unusual Cattle Market trough relocated from Croydon at the time. It is located near the Harefield Road entrance. The trough is a listed Grade II structure because of its link with the neighbourhood and unusual design. For more details of the trough go to Croydon and Wallington below. 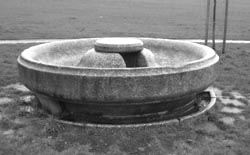 Philanthropic bodies and civic amenity groups played a significant role in advancing sanitary improvements in towns and cities from the 1850s onwards. The provision of drinking fountains, giving free, clean, water to all was a great step forward, and changes in the attitude towards animal welfare saw drinking troughs for animals also being provided in urban areas. Such troughs were not only provided by charitable organisations, but also by individual benefactors, concerned by the plight of animals who often suffered acutely from the lack of available drinking water in towns and cities.
Picture right: the circular Cattle Market trough 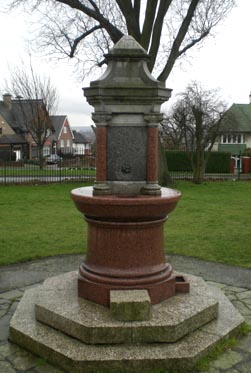 The Norbury Brook flows through Norbury Park.
POLLARDS HILL
There is a magnificent drinking fountain at Pollards Hill. Pollards Hill occupies the highest point in Norbury and on a clear day the view stretches to . It was originally part of the Great North Wood and the name 'Pollard' derives from this connection. Pollards Hill had been left as an open space as the surrounding estate developed and it was given to Croydon Council in 1913 by Sir Frederick Edridge. This drinking fountain, which no longer works, is towards the lower end of the park near the gates. The inscription on the fountain reads:
THORNTON HEATH POND AND FOUNTAIN
Between the River Wandle at Croydon and the Norbury Brook / River Graveney lies Thornton Heath. The former pond at Thornton Heath was not only within the catchment area of the River Wandle but during the 18th century was also an important cattle and horse watering facility for livestock on the London to Brighton Road. Situated in the middle of the London Road, it was one of the localities' oldest landmarks. The colliers of this area burnt wood from the Norwood Hills in kilns cooled by water from the River Graveney which runs through the district. It was a main supply of charcoal to London. When the railway station first opened in 1862, it was named Colliers Water. In the 50-year period 1861-1911, Thornton Heath saw a complete transformation from isolated rural village to integrated suburb. 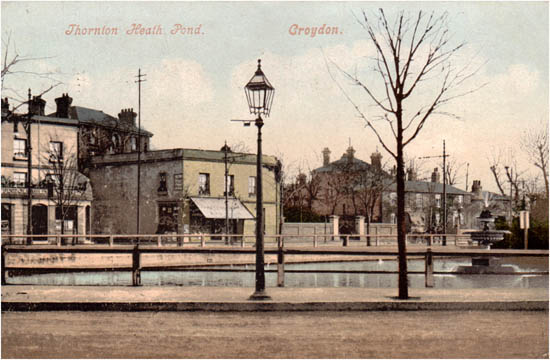 The first horse drawn trams at Thornton Heath ran in 1879 and the Croydon electric tram system had its headquarters at Thornton Heath Pond (the bus garage stands on the site today). With the increasing traffic the Pond had become a potential hazard. In 1891, for example, a parcel mail coach on its way from Brighton to London in fog, ended up in the Pond instead of on the road. In 1897 the Pond was finally surrounded by railings, and trees were planted round the outside. An impressive new fountain was erected in the middle to commemorate Queen Victoria's diamond Jubilee by Croydon Borough Council. It was paid for by the local residents.

During the 20th century however all was not well. In 1953 the Pond was filled in and turned into an ornamental garden with a small pool. Vandalism prompted the Council to fill in the pool in 1975, and Thornton Heath Pond became little more than a traffic roundabout on the A23. In 2003, however, fifty years after it was filled in, Thornton Heath Pond was once again flowing with water, thanks to a new water feature funded by Croydon Council's Smarter Croydon initiative. It was removed shortly afterwards.

INDEX OF LOCALITIES
Click the titles to go to the details of the Springs, Spouts and Fountains associated with the River Wandle in that locality.