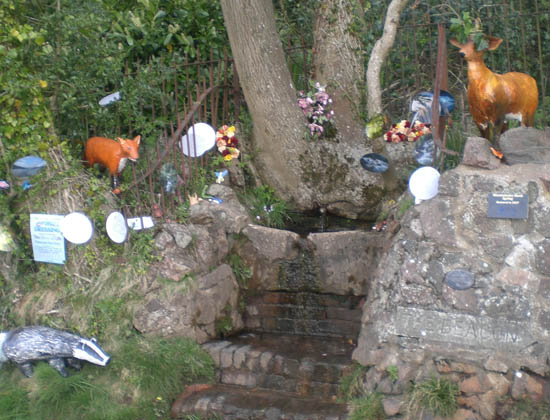 Westminster Bank decorated over the May Day bank holiday weekend as part of the well decorating celebrations in the Malvern Hills.
Malvern's first well decorating competition was in 1993 when about eleven spouts and fountains were decorated. The event has grown steadily and this year over forty water features were decorated, creating huge local and national interest. See the later article for the winners. 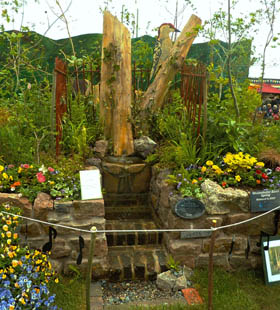 Weird Coincidence or Fate?
How do chance events occur that result in unexpected coincidences? Are we in receipt of paranormal intervention? Westminster Bank received the Founder's Prize in early May following the well-decorating. Only a week or so later Herefordshire and Ludlow College (Holme Lacy Campus), selected Westminster Bank as the theme for their garden at the popular RHS Spring Garden Festival at the Malvern Three Counties Showground. It was awarded a distinction.
This was followed by another strange coincidence. In mid-April this year we visited the Isle of Staffa and Fingals Cave. To our surprise another delightful floral display featured in this year's competitions at the same RHS Spring Garden Festival was, have you have 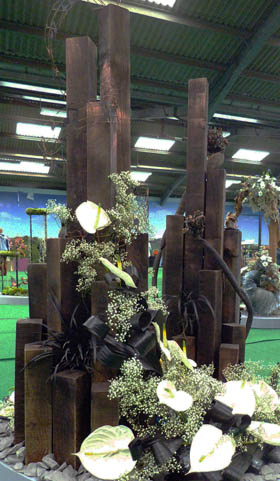 guessed it? - Fingal's Cave.
See the following article and the pictures left and above showing the two coincidental displays.
Naming things - How History is Made
When we started discovering the springs and wells of the Malvern Hills in 1992, only a few well known ones had names. We therefore gave nicknames to several to enable us to remember which was which. Later, if we discovered a historically used name we then reverted to the historic designation. The ones that had never been named inevitably kept the nickname. A good example of this is Goat Spring in Holywell Road.  When we discovered it there was a goat grazing nearby. Subsequently commoner Roly Baylis was quite proud to have a spring named after his beast which ironically at the time had caused some consternation with the Conservators.
As you can imagine we were amused to find that using a conveniently created name was not new as it appears to be the case of Fingals Cave on the Western Isles of Scotland.  Sir Joseph Banks (1743-1820) was a famous English naturalist, botanist and patron of the natural sciences. He was the first person to publicise Fingals Cave having visited Staffa in August 1772 after which his account was printed in  'Pennant's Tour of Scotland'. Joseph Banks was on his way to Iceland when he diverted to Mull. Here he met up with Mr Leach, a local man who guided the party to Staffa, explaining that the cave was probably one of the greatest wonders of the world. Later there was some debate as to whether the name Fingals Cave was 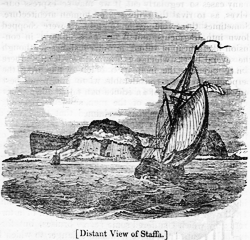 derived from Bank's account based on a misunderstanding between the guide and himself. Apparently Mr Leach, no doubt using a broad Scottish accent, attempted to explain to Joseph Banks the Celtic history and naming of the remarkable cave. Later when Banks put pen to paper he was no doubt confused by his own notes of the meeting. In particular he was confused by his record of the Celtic name. Banks settled for calling it Fingals Cave and so it came to be! By 1832 Fingals Cave was a recognised tourist destination rather like the springs and wells of the Malvern Hills have now become.
Go to www.Grotto.Directory and search for Fingals Cave in the index 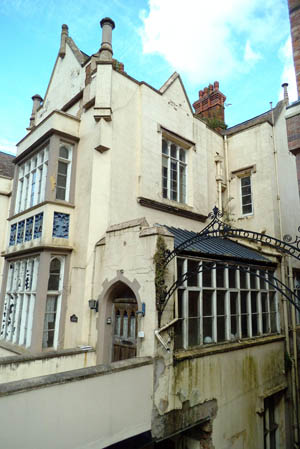 for more details.
Which is the Greater Folly?
In our last Newsletter we discussed the ruination of the Malvern Hills with cafeterias and cable cars - as a result of interest by Friends we now give more details of Oban's and perhaps another possible Malvern ruination.
In 1881 several Glaswegians founded the Oban Hills Hydropathic Sanatorium Ltd. Their intention was to build a 137-bed Scottish baronial style hotel with a conservatory, concert room, gardens, a golf course, stabling and sea water baths. A hydraulic lift would bring guests the 200 feet up to the top of the hill and a miniature railway was built to hoist building materials to the summit.

By 1882 the walls and roof of the new building could be seen from the town. Then the project was beset by financial problems and building work stopped; for ever. The stone was plundered by the local people for new houses and the building became a ruin. It was and is a hydropathic folly. Chambers English Dictionary defines a 'folly' as 'a monument of folly, as a great useless structure, or one left unfinished, having been begun without a reckoning of the cost'.

Malvern also has a hydropathic buildings heritage. Currently we have no hydropathic follies but in the near future we may well have Holyrood Folly. When Holyrood House becomes structurally unstable because the roof, gutters and windows have not been kept in good weather proof repair will this be Malvern's equivalent to Oban's folly?  Which is the greater folly; the one left unfinished or the one that was finished and used but allowed to become a great useless structure? 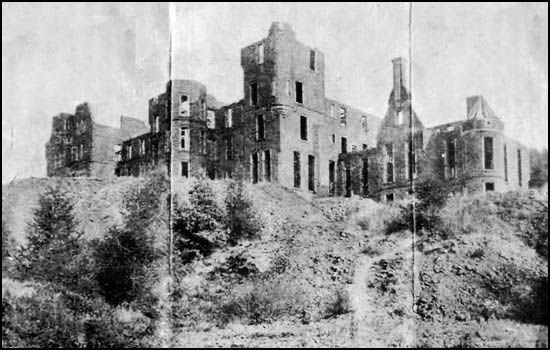 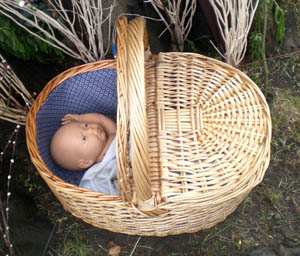 This year there were forty two decorated sites and this is testimony to the popularity of this May Day weekend festival in Malvern. The theme in 2015 was River of Life and over the weekend there was a constant procession of visitors to the sites. This even resulted in a traffic jam on Holywell Road. We were amused to spot a baby featured in Lord Sandys' Spout decorations. Presumably this was Moses in the Bulrushes but could equally have been the new Royal Baby who was named Charlotte this same weekend.
In the picture is it Moses or Charlotte? Part of the decoration orchestrated by St Matthias School at Lord Sandy's Spout.
The 2015 Founders prize was presented to the girls of Year 5, Malvern St James School for their creative decoration of Westminster Bank, The theme this year was 'The River of Life' and at Westminster Bank the river was supporting life in all its variety - flying, crawling, slithering, swimming, hoofed and unhoofed, hairy and hairless, and flora. Materials incorporated in the decorations included natural and handmade items using papier mache, clay and card, tree, grass and flowers. The deer was prominent from quite a distance; an enticing landmark that beckoned visitors. The use of the deer turned back the clocks centuries, to the time when animals were hunted for sport in Malvern Chase. Cora says "It was a pleasure to hunt here for so many different creatures during the Well Decorating weekend and to make the award following discovery of this delightfully decorated water source." 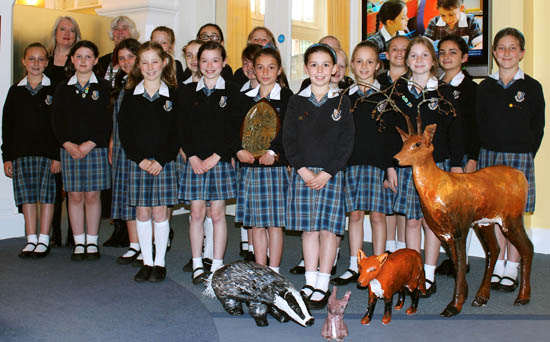 In the picture:  The Founder's prize awarded to Year 5 of Malvern St James School.
The presentation was made to the nineteen girls and teacher Mrs Sarah Jones by Cora Weaver. The award is sponsored by Coca-Cola Enterprises and is presented in conjunction with the Friends of Malvern Springs and Wells. 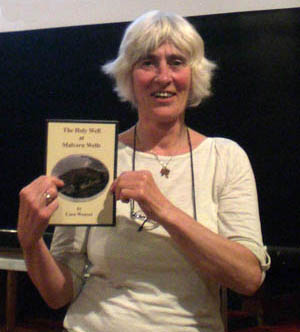 New Book Launch - The Holy Well at Malvern Wells
The latest book from Friends of Malvern Springs and Wells historian and author Cora Weaver was launched in June this year. It uncovers a previously unpublished history of the Holy Well based on maps, etchings and photographs of the building, original documents, and oral histories from people who worked, lived or collected water there.
Today the Holy Well is famous because it is the only place where the Malvern Hills' famous spring water is bottled. But for most of its life it was renowned as a place where people from far and wide came to be healed. The book tells who came for treatment; where they came from, and how they applied the water to their diseased bodies. Other revelations in the book include how the iconic well house developed into its present state. The book also includes information on the two adjacent buildings, Rock House and Holywell Cottage. 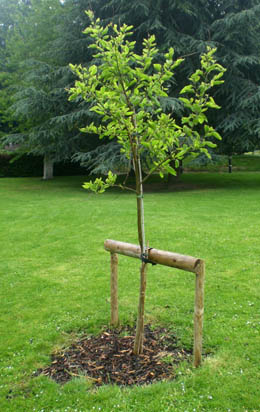 In the picture Cora launches her new book at her lecture to the Civic Society on 12 June at Christchurch. Priced at  £2.99 (65p P&P) the book is available from the author and from Malvern Tourist Information Centre in Church Street, or from Malvern Museum at the Priory Gatehouse.
Stop Press - The Mulberry Tree in Priory Park flourishes this spring. Next year is the formal unveiling of this G B Shaw treasure - see the picture taken in June.