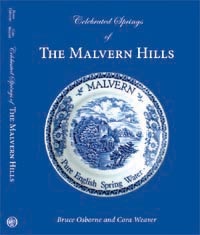 Friends are the water that keeps the wheel turning. We are an independent voluntary group who relentlessly promote research, conservation and celebration of the Springs, Spouts, Fountains and Holy Wells of the Malvern Hills and of Great Malvern as a Spa Town.

Reminder - Its Christmas soon and what is the ideal present?

You can purchase copies on-line at www.malvernwaters.com by clicking on Bookshop; alternatively send a cheque payable to Cora Weaver for the sum of £25.00, 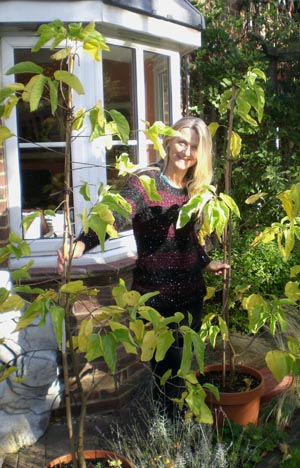 either way it includes package and postage UK. (send your cheque and details to the address at the end of this newsletter) This ground breaking book is also available in Malvern bookshops.

Mulberry Tree Project  Our plan to reinstate the George Bernard Shaw Mulberry Tree in Priory Park is literally growing larger by the minute.  Bernard and Bernadette are being nurtured by Rachel in a secret location and have now reached record heights.  See the picture and notes on Mulberry Trees later in this newsletter.

We are pleased to announce that we have another St Werstan Award winner for the enhancement of the water heritage of the Malvern Hills.  This is the 6th site to be awarded the famous brass plaque.  As a result of the ballot of Friends that was announced in Newsletter 46 we can reveal the following scores.  For preservation, the fountain scored 90%. For environment enhancement the score was 84%; public accessibility scored similarly at 84%; provenance 88%; care and maintenance 86% and the general wow factor score was 88%. Overall the score was 87% which considerably exceeds the standard set many years ago and means the award can go ahead.  Thank you for all who

returned the questionnaires and to our sponsors Coca-Cola.  We will announce the award ceremony directly the necessary arrangements have been made.

We learn from a Friend on the Isle of Wight that the century old Wandering Fountain has at last found sheltered housing. The County Press recently told the story of the granite drinking fountain that over its lifetime has had four homes in Newport and in the process lost its basin, tap and even its top. Now locals and the Parish Council have come to the rescue and moved it to a new position on Newport Quay. The tap is replaced and apparently working and the top restored. A new basin is due soon.  Hopefully this fountain, originally erected in memory of Sir Barrington Simeon in 1909, will live happily ever after.  If you are passing that way have a drink on me!

We are attempting to locate wandering water features in The Malverns with a view to restoring them to prime locations. Do you know where a once notable water feature lies disused and abandoned out of sight and out of mind?

On the 16 November Malvern Museum revealed part of its unique collection of 100-year-old glass slides. This was a rare occasion to see the images of Malvern in the past projected as our ancestors would have seen them. The museum organised two vintage projectors and the pick of the glass slides to entertain a substantial audience at the Mount Pleasant Hotel. Many springs and wells enthusiasts were present and it was fascinating to see these early depictions of locations such as the Dumpling Fountain, Walms Well and the Pewtriss Spring as they once were. Audience participations enabled many uncertain scenes to be clearly identified. The presentation was led by Cora with the valuable aid of a team of assistants, making the whole venture a most memorable evening. The room was donated by the Mount Pleasant Hotel and all entry fees went to the museum restoration fund. 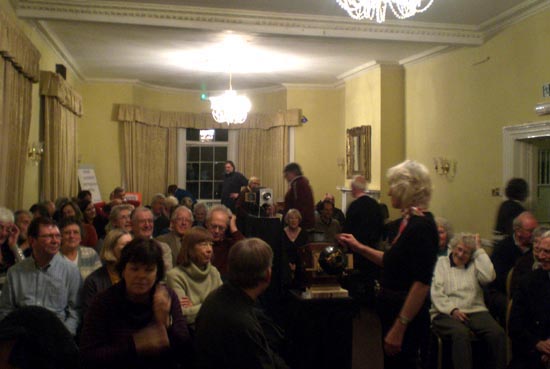 The One That Got Away

On a dreary day in November a party of undaunted explorers met to discover the forgotten water feature in the grounds of Hampton House in Abbey Road.  The site is now a substantial area of almost impenetrable brambles and scrub but we were on to a hot tip resulting from the Joanna’s Well feature in the Malvern Gazette. The site was formerly part of Malvern College and included an open air swimming pool. With machetes slashing and cutters clipping, we disappeared into the wild woods, probably the first humans to venture in for decades! 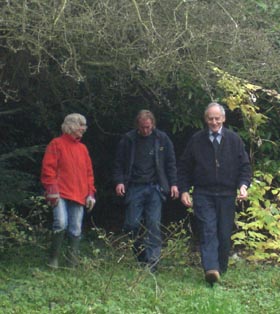 Tired and exhausted we arrived at the rail around the swimming pool, but no signs of a water feature or even the pool itself! Tracing a rivulet we felt the excitement mounting before we discovered it emerged from under the wall opposite the Ellerslie Fountain. This was indeed the water that we had sought but no sign of anything else other than wild briars and bushes that ripped at our clothes and skin. After hours of toil we concluded that the entire site had been overlain with soil and debris at some time, possibly in the interests of pupils’ health and safety. We will watch the site with interest in future in the hope of uncovering some interesting archaeology. In the picture Cora of Friends, Adrian Long from Malvern College who kindly gave permission for the exploration and Michael Haines, former grounds man who tipped us off, emerge from the dark into the light. Bruce who took the picture lies bleeding and exhausted on the lawn, off camera! 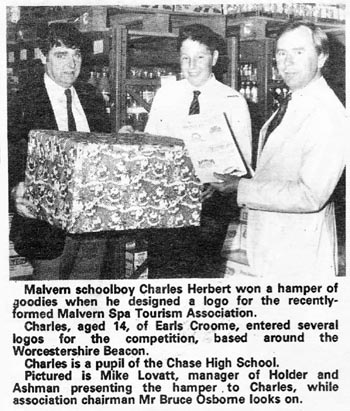 Back in 1992 a team of people with local knowledge and tourism expertise came together under the banner of the Tourism Association. This was a body initiated by the District Council to develop tourism themes and activities to enhance the local economy. From this the springs and wells theme evolved including well decorating, which was inaugurated in 1993. We have now added the background to well decorating in the Malverns to our web site, giving details of how it came about. To have a look click on Web Sites Index on the top left menu, then click on '34 History of Well Decorating'.

In the picture from the Malvern Gazette 21 Aug. 1992, a prize for the Association logo design was presented to the winner by association chairman Bruce, and Mike Lovatt of Holder and Ashman, the cash'n'carry then in Malvern Link. This was part of the programme to create a viable organisation and image 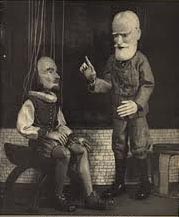 These two marionettes were made by Waldo and Muriel Lanchester when they ran their marionette theatre in Malvern.  They sent the puppets to Shaw and asked him to write a little play (it lasted 20 minutes) about the two men. The result was Shakes versus Shav. Each said of the other that they couldn't possibly be as good as their work implied i.e they must have had help from elsewhere. In this picture they're discussing whose mulberry tree will last the longest.

Fans of Peter the Great (1672-1725) will be delighted to know that, it is said, he introduced mulberry trees into England when he worked here as a shipwright before taking over the reins of office in his native Russia. A small piece of his tree is said to form the blade of a dagger in the City of London shield, which is incorporated into the floor of the Coal Exchange (opened 1849), almost opposite Billingsgate fish market.

Where does that leave fans of G.B.S? He didn't plant a juniper, a wild service tree, crab apple, Midland hawthorn or other native species in Malvern. No, he chose a foreign mulberry, native to central and eastern China - because Shakespeare (1564-1616) had planted one at New Place in Stratford, where he lived for six years until his death in 1616. There are still many old, large, fruit-bearing mulberry trees in England that were planted at the end of the 16th and the beginning of the 17th centuries. It is said that the first was planted at the Duke of Northumberland's West London home, Syon House, in 1548. Knowing this chronology, does it make Peter any less great?

Shaw's Tree - Shaw wanted his reputation to have the longevity of Shakespeare's: to be revered for eternity as a brilliant dramatist; to have his plays translated and performed throughout the world, and have his home visited annually by millions of ardent worshippers. Well, that didn't happen; but what about their trees? Shaw's blew down in a gale and was chopped up. But children, and grandchildren, of that tree survive in the northern and southern hemispheres and we are rearing one to replace the original tree in Priory Park, Malvern in due course. 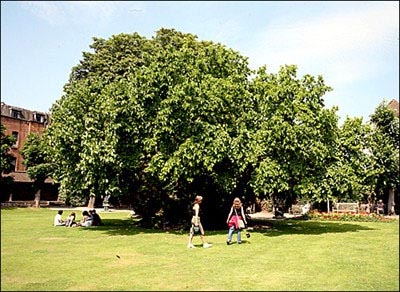 Shakespeare's tree - New Place was demolished and rebuilt in 1702 but in 1759 the owner, Reverend Francis Gastrell, quarrelled with the town authorities over taxation and had the house demolished. Only the foundations of the house remain. He also chopped down Shakespeare's mulberry tree. Some said it was in a fit of rage caused by the endless stream of tourists; others that the tree made the house damp. Apparently local clockmaker and carpenter Thomas Sharpe bought most of the wood and carved Shakespeare memorabilia from it, some of which are on display at the museum in Nash’s House. It is said that the old mulberry that stands in the former gardens was grown from a cutting rescued from the original.  In 2012 an archaeological dig began on the site of New Place to discover more about Shakespeare's life there; but the mulberry tree is in the way. There is a vociferous opinion that the tree has nothing to do with Shakespeare and should be cut down. However, we've proved, with the number of cuttings that have taken from Shaw's tree and the ease with which they've zoomed into life, that it's quite unnecessary to lose the tree altogether.

Were the berries on Shaw's mulberry tree black or white?  There are several species of mulberry; the most common are the black (Morus nigra) and the white (Morus alba), both of which were imported to Britain centuries ago and which have edible fruits. Ours have not yet fruited, so how can we guess what colour our fruits will be? One local mulberry expert gave these guidelines. Morus alba has slighter, more slender twigs with a thinner, smoother leaf.  Morus Negra is "a wrestler rather than a sprinter", with thicker, stockier twigs. Its leaves are thicker and a darker green. We expect white fruit.

Plans for Remote Information on springs and wells - QR Codes

We have now almost completed a web site that details all of the springs and wells sites around the hills. Each site includes information on the water feature including where to find it with a map and its history. The web site is designed to be suitable for viewing on large or small screens. Have a look at the index by clicking on the top banner of our web site home page. 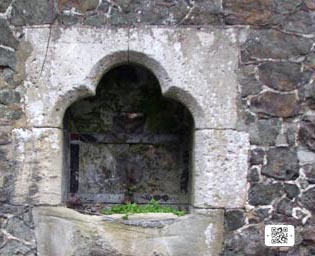 As part of the overall project we are now introducing QR codes, which provide access to the web site information for people with smart phones. If you are out exploring, site details are accessible on your mobile phone by capturing the QR Code, which may be displayed in a convenient point near the location. This is part of a general plan to rationalise and organise the more extensive use of QR codes around Malvern in conjunction with various other local organisations.

The data on our web site is continually updated and is a specialist information resource rather than a general commercial site. Much of it complements rather than duplicates information in our new book. There is no cost involved in using this facility and we can supply the QR codes as required for use in the field. Our QR Code information is on-line and accessible by going to our 'Web Site Index' and clicking 46 QR Codes. Have a look and let's have your comments.