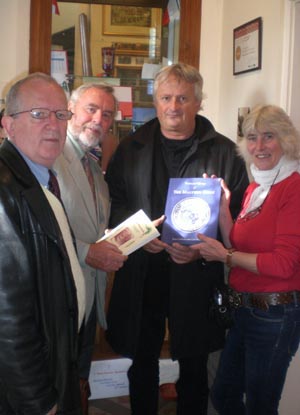 Friends are the water that keeps the wheel turning. We are a voluntary group who relentlessly promote research, conservation and celebration of the Springs, Spouts, Fountains and Holy Wells of the Malvern Hills and of Great Malvern as a .

Blind George Pullen would have applauded in astonishment and admiration if he'd been at on Saturday 20th October when Carleton Tarr, a Friend of Malvern Museum, played the Czech national anthem on the same Dulcitone that Blind George played for many years at s Well for the benefit of visitors to Great Malvern.  Carleton was accompanied unhesitatingly by the voice of Mr Zdenik Kral, the mayor of the fairyland Czech spa town of Marianske Lazni. Mr Kral was accompanied to the museum by Mr Vladimir Kajlik and Cllr Ian Hopwood, the Mayor of Great Malvern. Our European visitors were escorted round by Cora in her role as Chairman of Malvern Museum, who drew comparisons between the uses of source waters in both towns. In advance of the visit, the museum had translated its visitor guide into Czech and set up a special exhibition about Marianske Lazni. The exhibits were lent by Cora and Bruce of the Friends of Malvern Springs and Wells, who have visited the spa, formerly known as Marienbad, on numerous occasions. Artefacts included an earthenware water bottle, water-drinking vessels constructed so that the mineralised water didn't stain the teeth, and an elegant, late 19th century gold decorated engraved ruby crystal goblet used by wealthy water cure patients.

In recognition of the international significance of the healing springs of both spas, Bruce and Cora presented the visitors with a signed copy of their recently published book, Celebrated Springs of the Malvern Hills, and a copy of their 1994 book Aquae Malvernensis, which was the first comprehensive book to have been published about the history and geography of the springs and wells of the Malvern Hills. It was a memorable moment for the two spa towns and that evening their two mayors signed a declaration of twinning.

In the picture Bruce and Cora are presenting copies of our books to Vladimir Kajlik (far left) and Zdenik Kral, the Czech visitors in front of the exhibition about Marianske Lazni.

It looks as if the Bottling Works Spring is to receive the St Werstan Award. Thank you to all who sent back the questionnaire. We will total up the scores later in November when we are sure all those sent back have been received. More details will be in the next Newsletter.

You will probably be aware that QR (quick response) codes are becoming a useful facility for finding out about something quickly using a smart phone. You scan the code and it takes you to a web site.  We are up and running and would welcome your feedback. Have a look at the Marianske Lazni display at Malvern Museum, where the QR code takes you into Marienbad Springs and Wells. Alternatively try the code at the end of this newsletter. Let us know what you think. Tip - when you get into the data that is of interest hold the phone in the landscape position.

Preparing for the Malvern Gold Rush

Research into the springs and wells has led us into exploring the possibility of gold being present in the Malvern Hills in recent years. So we are planning for the gold rush when adventurers, opportunists and vagabonds all congregate on the hills in search of fortune. One of the major concerns is the transhipment of the precious metal once it has been discovered and wrenched from the rock.

In the US there was a dramatic discovery of gold at Fort Sutter California in 1848. By May of that year the entire US continent rang with excitement and fortune hunters by the thousand made their way to California. The military governor, Richard B Mason commented, "The most moderate estimate I could obtain was that upward of 4,000 men were working in the gold district and that $30,000 to $50,000 worth of gold was daily obtained." The population of California, which was 20,000 in 1848, rose to 250,000 by 1852, and in the same period it was estimated that the amount of gold mined was to the value of $200 million.

It was the transport of gold dust and nuggets which laid a heavy burden on the Express Companies. Although there is no record of the exact amount high jacked during those early days, Wells Fargo estimated that the cost in lives was 16 drivers and guards shot in the raids, but 7 stage robbers were lynched and 16 others killed in gun battles. In all, over 240 bandits were convicted and imprisoned. Will Colwall be next?

In the picture: Bruce rides shotgun on the Virginia City stage as it passes a Comstock mine in training for the Malvern Hills Gold Rush. 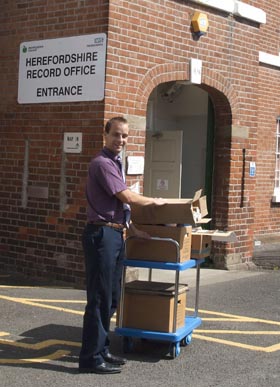 In the picture Philip Bouchier from Hereford Record Office takes possession of the Colwall archive material.

Two years ago the Friends of Malvern Springs and Wells were asked by Coca-Cola to collect the archive and artefacts from the bottling works and provide appropriate new homes for them. The artefacts went immediately to Malvern Museum, and were put on display there last year. It was originally decided that the archive would go to Worcestershire County Record Office, which already has a sizeable Schweppes archive. Since the record office was being transferred to the magnificent new Hive in the Butts, the transfer of the archive from its safe storage was delayed until the Hive opened in April.  However, there is an agreement between the county record offices of Hereford and Worcester that material generated in one county is not deposited in the other. So it was that the Colwall factory archive has therefore now been deposited at Hereford Record Office.

The archive consists of several photograph albums of staff from the 1950s to the 1980s; 1950s photographs of Schweppes' factories at home and abroad; production records 1930s to 1980s; visitor books 1950s to 2012; scrap books and envelopes of Press cuttings and 1945 elevations of planned new buildings. When it's been catalogued, it will be available for public access. 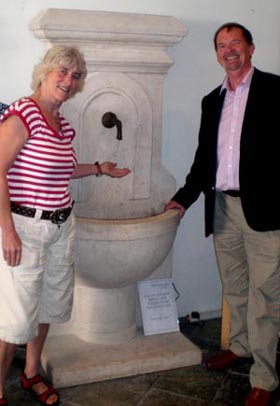 In the picture Cora tests the water flowing at Malvern's latest fountain. Installed recently in the Courtyard on Belle Vue Terrace, this Italianate water feature adds a charming backdrop to the tea rooms that now attract passing residents and visitors.  It is the result of the work of Adrian Ward who has been responsible for remodelling the premises. Adrian is pictured with Cora. Although the fountain is not drinkable, it is providing another function, that of wishing well. The considerable number of coins dropped into the basin testifies to the popularity of this practice, a custom that dates back many hundreds of years. To find the fountain take the passage towards the hills off Belle Vue Terrrace, pass the Bottling Works Spring on your right with the tea room tables and enter the Courtyard area. The fountain is just inside on your left.  At the same time you can browse the other interesting shops that go to make up the complex. And so, if you are in Great Malvern and wish for a little light refreshment, your wish will be granted in a very practical and pleasant way.

The 11 August this year saw an event that was to change the perception of Malvern's springs and wells. Cora and Bruce launched their new book "Celebrated Springs of the Malvern Hills" covering 130 Malvern water sites of special interest. The event was most successful and this is without doubt in large part due to the support and assistance that many Friends have given this project.

The launch took place at the Mount Pleasant Hotel, Gateway to the Springs and Wells and was attended by local as well as far flung enthusiasts, eager to be the first to discover the results of 20 years research into our water features.  For the first time details of The Dumpling Spring, Darke's Tank, Ragged Stone Spring and many more previously unrecognised or long forgotten sites were revealed to the public.  The book is lavishly illustrated with about 200 pictures and a similar number of pages and represents a major definitive work on Malvern waters. It also contains a chapter on water bottling and as such is a fitting tribute to the 160 years of Schweppes bottling Malvern waters in various locations. 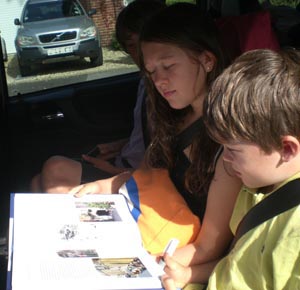 Published by Phillimore this book is a must for anyone interested in or involved with the Malvern Hills and Malvern Waters. It retails for £25.00 and is now available from a wide range of local outlets including The Malvern Spa, the Cooperative Bookshop in St Ann's Road, Malvern Museum and even Harpers Bazaar in Malvern Link, the proud owners of one of the more unusual sites. Alternatively send your name and address together with a cheque for £25.00 payable to Cora Weaver, 4 Hall Green, Malvern, Worcs WR14 3QX for a copy by post or go into Bookshop on our web site www.malvernwaters.com.

In the picture: The Cooper family admire their picture on page 154 of Celebrated Springs when they met Edward Elgar on Belle Vue Terrace, during an exploration of the springs and wells.

Diary Dates - on Thursday 29th November there will be a free social evening at the  Malvern Bookshop Co-op in St Ann's Road in Malvern town centre. It starts at 7 pm and Cora and Bruce will be talking about new discoveries this year with Malvern's springs and wells and the water cure. There will be a short walk about 8.30 pm. All are welcome.

Also this year is the 125th Anniversary of Jenny Lind's death in 1887. This famous Swedish singer performed her swan song at the West Malvern Spa. On Friday 2 November the Civic Society will be holding a graveside tribute to her at 11.00 am. - meet at the Wilton Road entrance to the cemetery at 10.45. There will various contributions, including one by Cora, and music. Do come along to the Great Malvern Cemetery where Jenny Lind's grave can be found. A sign post points the way to the grave. 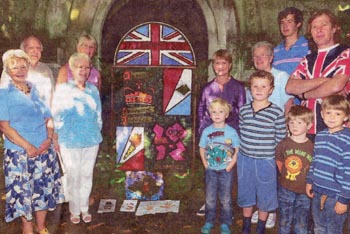 Decorating versus Dressing.
A Friend has sent us this picture, which appeared in the Isle of Wight County Press recently. It's the 2012 Well Dressing at St Lawrence. The theme this year was The Olympics and Diamond Jubilee. Unlike Malvern with our 130 springs and wells, there is only one well at St Lawrence. Dressing involved making a wooden frame that was filled with clay bordered with coffee beans. Then flowers and other interesting decorative objects were pressed into the clay. This was all done in a local garage before the well was formally dressed and blessed. This traditional way of celebrating is different from the Malvern Hills in that our decorators rarely use the timber frame and clay. For this reason ours is decorating, often in the most imaginative manner - remember "Scott of the Malverns" recently in newsletter 43?

The Fergussons back after a century away. 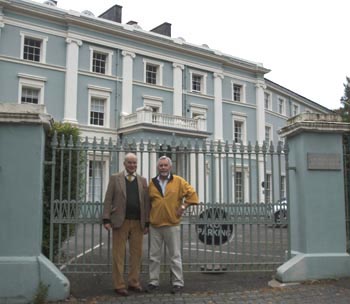 On a weekend in October we were delighted to meet Dr Douglas Fergusson and his wife Marguerite. The family were active during the days of the water cure and both Douglas's grandfather and great grandfather were legendary Malvern water cure doctors. Now living in Buckinghamshire, they had decided to catch up on the family history and what better place to do this than Malvern Museum and a chat with Cora and Bruce. In the picture Dr Fergusson and Bruce stand outside The Establishment where the Fergusson family once practiced.