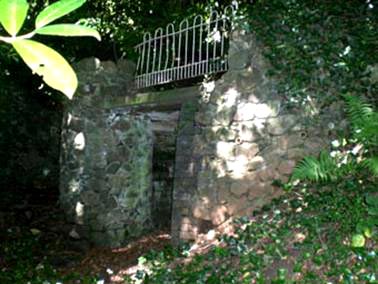 In the last Newsletter we published details of a possible newly discovered water feature. As a result of further investigation we are now able to give much more information. The feature lies in the grounds of Ellerslie, formerly a water cure establishment in the 19th century, which became a girl's college and was latterly part of Malvern College. The site is presently being redeveloped by Audley as a care community for the elderly.

Joanna, who unearthed the site following an editorial in the Malvern Gazette, has given us the following amusing tale of life as a student at the former college. 'I have been a member of the Malvern college family since 1998 when I entered the pre-nursery; Hampton, and then moved upwards in the school system to Hillstone, which was previously known as Ellerslie. I remained there until I was 13, having been a student there for 6 years. Throughout my time at Hillstone, there were always ominous areas of the campus known as 'out of bounders'. The well site was one of the more strictly enforced areas. To keep my curious class-mates away from our favourite health-and-safety hazard, upon our arrival we were all told a story about a little boy called 'Timmy' whom had the misfortune of falling down said well and meeting his end, having disobeyed his teachers. This kept most of us at bay, that was, until we as a class watched the movie 'Lassie' and realised with a mix of shock and glee that our barrier of fear had been constructed upon a borrowed story-line. That break-time the cautionary tale was replaced with stern tellings-off and the risk of 'stripes' (a kind of de-merit that would result in one week's worth of clearing the table). Ever since the risk of certain death had been replaced with a week's clearing we were all frequent visitors to the well in the woods, much to the dismay of our disapproving disciplinarians.'


Having learnt the above, we then followed up with enquiries at Audley and were delighted to learn that the grounds of Ellerslie will be retained as parkland to be enjoyed by the residents of the community. Audley also arranged for us to have escorted access to the site for further investigation. We understand that the well will now be retained as a garden feature after having undergone restoration to make it secure and safe.  This is overall a positive outcome following discovery of this most interesting landmark.

First ever Mulberry Tree in England  also one at . 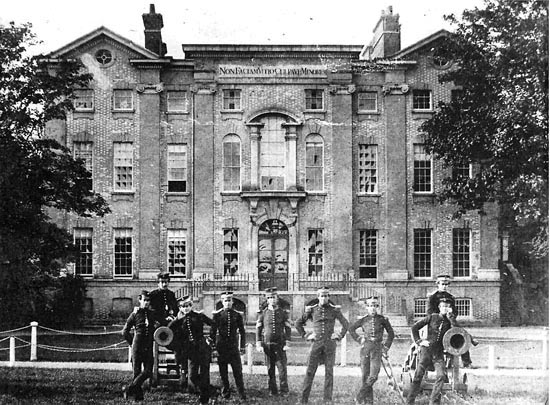 Our Mulberry Tree project to reinstate a Shaw tree in , Great Malvern has prompted us to explore the history of these trees. The first ever Mulberry Tree to come to England was apparently planted in Croydon would you believe. It was sited at Addiscombe House, which at the time was a building within the training college for the 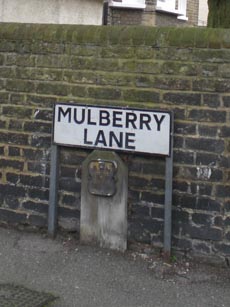 East India Company private army. The college was opened in 1809 and closed in 1861 when the land was redeveloped for housing. Addiscombe House ended up in Mulberry Lane and its garden contained the stump of a Mulberry tree - the first ever imported into England by Peter the Great who stayed here.  The house itself was a former grand mansion dating from 1702 when it was rebuilt by the Draper family. In the picture, cadets pose in front of the house; it is believed that the Mulberry Tree is that on the left of the picture. The East India Company came to an end with the Indian Mutiny of 1857, and Addiscombe House was eventually demolished although Mulberry Lane survives to this day.

Our investigations have also unearthed another early Mulberry Tree, this time in Malvern.  Apparently the Mount Pleasant Hotel had one in its grounds. Now the Gateway to the Hills, perhaps the visitor experience could be enhanced with another one? 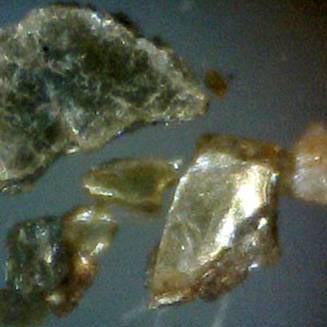 In Newsletter 42 we considered the possibility of gold in the Malvern Hills. This was linked to our exploration of the springs in the area of the Royal Well and the Purlieu. At the time we had actually acquired samples of supposedly natural Malvern gold dating from the 19th century. These samples were being investigated further.  One route of investigation was to study the samples under a microscope. In August we acquired a computer-linked microscope and put the samples to the test. The result can be seen in the images - what appears to be mini nuggets of gold. We also have some recent samples and when the chemical testing is completed on these we will be putting them under the microscope too.

St Werstan Nomination for Bottling Works Spring - it's your vote that counts! 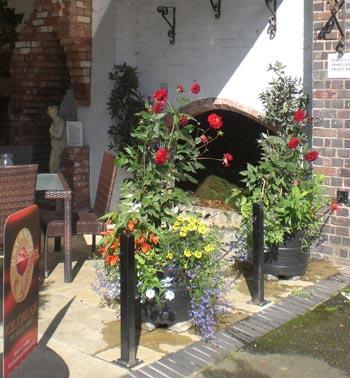 A Friend has recently nominated the Bottling Works Spring for a St Werstan Award. The Award is a public recognition of outstanding endeavour in the conservation or renovation of our water features. Friends, local residents and visitors can nominate sites for an award by forwarding a short resume of the circumstances and location. Friends of Malvern Springs and Wells are then able to express their views as to whether nominations justify the award by completing a simple appraisal enclosed with the newsletter. The appraisal is based on six factors, preservation, environment enhancement, public accessibility, provenance, maintenance and general WOW! factor.

The spring was first brought to public attention in our 1992 publication Springs, Spouts Fountains and Holy Wells of the . Since then it has been transformed and is now an attractive feature in the Courtyard off Belle Vue Terrace. The geology of the spring is of note because the water is issuing from the soft Triassic sandstone where it abuts the bedrock. The sandstone has led to ancient caves in the area, one of which was likely used by St Werstan, the founding monk of Great Malvern in the time of Edward the Confessor and now the patron saint of our springs and wells.

So far six presentations of the prestigious St Werstan Award have been made since 2006. Sites awarded receive the impressive St Werstan hand-cast brass engraved shield. Also available is a stained glass window. 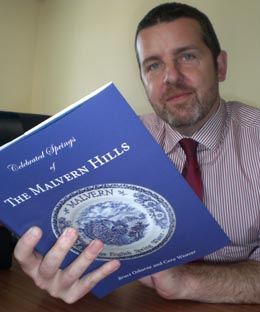 Sponsorship for this scheme comes from Coca- Cola on behalf of Malvern Water from Colwall, unfortunately now closed and we are grateful for the continuing interest that is shown by Coca-Cola in protecting and conserving our springs and wells heritage.

Please do complete and return the questionnaire attached to this newsletter or print off a copy from the web site version of this newsletter if emailed. Go to www.malvernsprings.com for the Newsletters Archive.

Conservators and Springs and Wells

The role of the Malvern Hills Conservators in protecting the catchment areas of the famous Malvern springs and wells is vital for ensuring the waters' continuing wholesomeness.  In the picture Stephen Bound, the new Director, catches up on the latest and greatest of our springs and wells with a copy of Celebrated Springs and Wells of the Malvern Hills, launched in August this year. Friends hope to be working with Stephen on a number of projects and we are pleased to welcome him to Malvern. If you would like to catch up on the latest and greatest also, the new book is available from local retailers or by post from Cora's Bookshop on our web site. 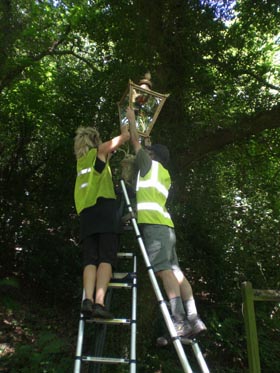 New light shed on goings on up

There is a lot happening up at the Holy Well these days as we found out during a recent reconnaissance.  The first thing we noticed was not the theft of a gas lamp but the installation of one of the new technology replacement lamps. The one hundred plus gas lamps around the Malvern Hills are slowly being replaced with modern technology gas burners that give more light for less gas. In the picture the installation crew reinstate the refurbished lantern and new burner on one of the lamps between Wells House and the Holy Well. It is now a good excuse for a late evening walk to enjoy the atmosphere of the gas lit leafy lane.

The other thing we noticed was that the bottles of Holy Well water now have new labels. No longer is it Holywell Spring Water. The new labels describe the elixir inside as Holywell Malvern Spring Water. This follows the decision of the Humm family, who bottle the water, to incorporate Malvern into the product description. Malvern waters live on, from the location where Schweppes started bottling the very same product in 1851 for the Great Exhibition.

Andy's Well Pump
A Friend, Andy, has contacted us regarding a pump operating gear he is restoring and wants help with identification. It is similar to a pump we featured in Newsletter 4 of December 2004 (see web archive). 'The pump is belt drive, two wheels one being an idler, the rest looking identical. I was looking for information on manufacturer as it has no maker's name. The pump itself I don't have as it's apparently still under ground but the running gear used to pump water on a farm near Trowbridge, Wiltshire. I understand that it was installed in the 1920's or 1930's. The original colour was black as this is what we have found during restoration. This is all the information I have. I hope you could add to it.'

If a reader can add to this please let us know and we will pass it on to Andy or contact him direct by emailing andy13176@tiscali.co.uk

Lady de Walden, Lucy Joan Cavendish-Bentinck, was the widow of the 6th Lord Howard de Walden. She built de Walden House together with de Walden Lodge in Eastbourne, Sussex, during the 19th century. This locality benefited from the services and water supply from the Eastbourne Waterworks Company as a result of an 1859 Act of Parliament. All was well until the water company demanded thirty pounds from Lady de Walden. She considered this demand was out of order and responded by sinking a well in her garden at the cost of one thousand pounds. This was not the end of the matter however because in 1889 she moved to another of her houses, this time in West Malvern. Here a prolific supply of spring water existed that she could utilise to fulfil her ambitions of a dream house and landscape, unencumbered by the machinations of the Eastbourne water deficiency and bureaucracy.

She died in West Malvern in her nineties on 29 July 1899 and during the 10 years in residence she had the house transformed into a vast mansion. It was set in a 283 acre estate whose gardens, terraces, pools and bridges required 70 men to maintain. The pools, and a variety of other domestic facilities, utilised the plentiful supply of water from Westminster Bank springs. All this work cost in the region of Â£100,000.00, an unbelievably large sum of money in those days. Was this all to not only fulfil her dreams but also to make a point to the Eastbourne Waterworks Company? The mansion is now the Elim Pentecostal Centre in , formerly St James' girls school.

Picture - the house in the 1930s. (courtesy Chris and Roland Bannister)