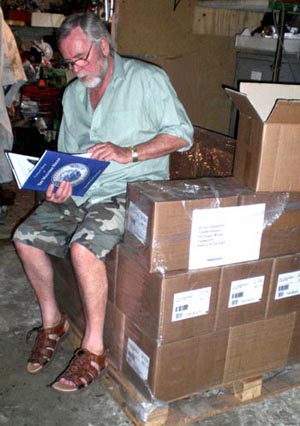 Celebrated Springs of the

In the picture the moment that authors dread - following the delivery of the first consignment of the new book, due to be launched on 11 August, Bruce, with great trepidation, opens the box and takes a first look at a work that has been many years in the making.  With hundreds of books finished and awaiting distribution, it is too late to spot an error or decide that you do not like something.  Fortunately all is well and Cora (below) prepares for the launch. 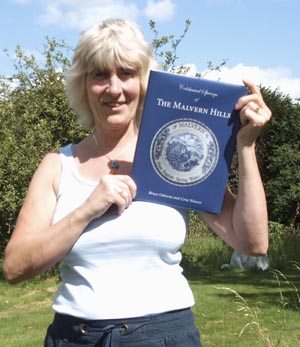 foot, by car or bicycle, or from your armchair. Many are being published for the first time as a result of extensive field and desk research. Maps and grid references guide you to elegant fountains, commemorative water features, animal troughs, water tanks, gushing flows and useful spouts where, even today, many people collect the water for domestic use. The text explains and interprets what you see. You can discover who provided water for the town before water mains were invented; where the water came from; who maintained the springs and fountains; who used them, and the problems of contamination. The theme of well-decorating since 1993 runs throughout the book, and is illustrated with many colour photographs of decorated wells, and there is a whole chapter on bottling Malvern waters.

Published by Phillimore in hard back, the book is lavishly illustrated with almost 200 pictures and a similar number of pages. This book would not have been possible without the support of many individuals and organisations, particularly Coca-Cola, who have ensured that Celebrated Springs of the Malvern Hills is a tribute to 160 years of bottling Schweppes Malvern Waters.

The book is priced at £25. Signed copies can be bought at the book's launch at the Gateway to the Springs and Wells, The Mount Pleasant Hotel, Belle Vue Terrace, Great Malvern, on Saturday 11th August, 10am - 1pm.  Sit with a coffee (provided by the management) and look at a rolling on-screen presentation of images from the book, then buy your book at the special discounted price of just £20, using the voucher 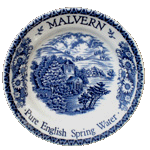 A Friend saw our new book Celebrated Springs of the Malvern Hills and researched the decorated dish that we reproduce on the cover.  It was a dish produced by Schweppes, who kindly approved our use of it for the book. Such a dish would be used for slices of lemon or bonbons. The Friend goes on to say that it is from 'Unicorn Table Ware, a member of the Wedgwood Group. The original pattern was the Chinese garden

with a catkin tree, a bridge - three figures crossing - a boat and Schweppes twice around the edge.' The illustration that we have seen is of a version as described but with Schweppes Soda Water around the edge. There are also other versions with Table Waters and Indian Tonic. The Malvern Spring Waters dish that we used is the only one with a view rather than a Willow Pattern; it's of Little Malvern Priory. 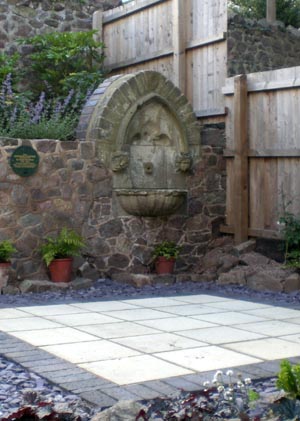 October last year (Newsletter 39) we noted that this work has been carried out. Further work has subsequently been done on the surrounding area including a courtyard and Malvern stone wall and we include a recent photograph. Unfortunately public access is still difficult due to the new fencing that accompanied the building development. During Civic Week in June the opportunity was taken of unveiling a Civic Society plaque.

Marienbad - The Civic Society for some time has been facilitating a town twinning between Malvern and Marienbad in the . Having been to Marienbad, a fairyland spa, on numerous occasions, we are supporting the endeavour with our own Springs and Wells of Marienbad.  A community partnership agreement has already been signed by the Councils of the two towns and it is planned to entertain the mayor of Marienbad in Malvern this coming autumn. For more details of the springs and wells, go to our main web site and do a key word search for Marienbad.

Following recent editorial in the Gazette, details of a new spring/well was emailed to us. Joanna's Well is named after the person who brought it to our attention. It is located near Ellerslie, south of Great Malvern. The structure is what we believe to be a previously overlooked or forgotten water feature. If you know of this feature and can let us have more details about its history and use, then do contact Cora or Bruce.

St Werstan the martyr was the founder of Malvern at the time of Edward the Confessor, just before the Norman Conquest. At the time Britain was a place of strife and St Werstan paid the ultimate price with his life. He was slaughtered by the Celts who saw his cell on the Malvern Hills as an imposition on their territory and culture. Now 1000 years later St Werstan is still under attack. The following missive was brought to our attention, scribed by a local person. 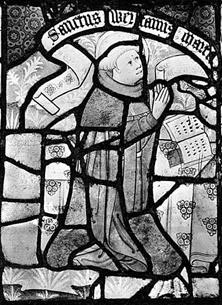 'By the way, Werstan was not a Saint.... a common error and wrongly published around here in print and cast on a brass plate. The medieval glass in Great Malvern Priory states Sanctus Werstan being the Latin for Holy Werstan NOT Saint Werstan. You will not find him as a Saint in the Vatican Archive or in the Definitive Dictionary of Saints.'

Saints come in many forms and many local saints were not formally listed by the Christian church in Rome or had fully authenticated life stories. Neither were they listed in formal international directories. St Werstan's story is commemorated in the medieval windows of Malvern Priory where he is referred to as Sanctus Werstanus.  Sanctus means saint (sancta for female), but can also mean holy. The most elementary Latin dictionaries will confirm this point. Like St George our national saint, little is known of St Werstan's life. Written records of the time were sparse and it was the Normans who subsequently initiated the keeping of records and documentation, starting with the Doomsday Survey.  In spite of this Victorian historians and others later have unearthed substantial records of St Werstan's life and achievements. In fact Dr Heather Guilderdale Scott thought his record was suspiciously too good and put this down to a ploy in the 15th century to influence the ownership of Malvern Priory (see Newsletter 26). Although his relics were lost with the Reformation, the evidence that was presented at the time has proved invaluable for piecing together his founding of the Malvern cell.

Perhaps what is more important, however, is what St Werstan represents? Malvern is most fortunate in having such a figure head. Werstan's life was one of sacrifice for the common good. He sacrificed his life for something that 1000 years later has given us the charming town of Malvern. His achievement continues to inspire the local community. He is adopted as the patron saint of our springs and wells and his award hopefully inspires others to follow in his footsteps. Over the centuries many have given their lives for the benefit of future generations and we perpetuate their memory as a token of our appreciation. Respect and dignity rather than attack is what St Werstan's memory deserves. 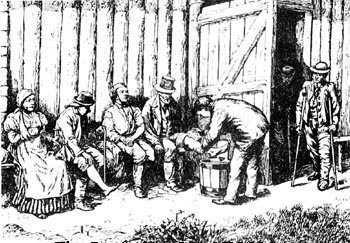 The G in G-Spot resolved.

The mystery of the precise whereabouts and effect of the female erogenous G-Spot is something that has been debated by many but we came across an interesting twist to the story, or so we thought. The G-Spot is short for Grafenberg Spot. Grafenberg is a spa resort in Silesia where Vincent Priessnitz first pioneered hydrotherapy. This subsequently was to have a major impact on towns like Malvern during the 19th century. Hydrotherapy is the application of natural waters to cure illness and disease and was seen as a much preferred alternative to drugs or the surgeon's knife during Victorian times. The practice spread rapidly world wide and Malvern's doctors transformed the town as they set up their practices. Dr Wilson even named his first hydropathic establishment on Belle Vue Terrace 'Grafenberg'. Later known as the Crown Hotel and then Lloyds Bank, it was obviously an important spot! Could it be that Priessnitz discovered the G-Spot and this was the well kept secret of success for Malvern doctors?  In the picture: is this the spot to discover the secrets - attending for the cure Grafenberg c.1818? The answer proved to be no. The G-Spot took its name from Ernst Grafenberg, a German gynaecologist, who wrote about the erogenous zone in the 1950s. Oh dear, back to the drawing board as they say!

For many years we have wondered where this picture of a group of donkey women was taken.  One of the ladies present is apparently Betty Caley, the well known donkey woman. We know from the caption that it is Malvern and would guess the date to be about 1850.  At last we think we have resolved the matter. It's the Lower Wyche Spout, though the spout, which is to the right, is not visible. What confused the provenance is that this picture was copied as an engraving, in which the back wall is shown as block work. This must have been a boarding point for people on foot going up the Lower Wyche Road to the Wyche Cutting.

Spa Tiles Discovered
Sicily was once a major location for the ancient Greeks and towns such as Syracuse rivalled Athens for its grandiose architecture and beauty. The Roman Empire expanded into Sicily and for a while the island was divided. Inevitably the Romans had designs on the whole island and eventually even Syracuse, the home of Archimedes, was conquered.  Although told to ensure the survival of Archimedes himself, a Roman soldier decided otherwise and the philosopher died by the sword. Subsequently there have been many power struggles and this has left a legacy of Greek, Roman and Medieval archaeology. The volcanic activity on Sicily, especially Mount Etna, provides prolific ground water aquifers as the winter snows melts with the onset of summer. The water emerges as springs, often mineralised, and this in turn has led to a spa industry that survives to this day. In the town of Sciacca, where both the Greeks and Romans used the waters for healing, we recently discovered such an active establishment and were intrigued to find an historic and beautiful portrayal of both the healing and heritage. These hand painted ceramic wall tiles are a feature of Sicily and in this case feature a typically Greek ruinous temple, a medieval castle and people bathing in healing springs. If you are ever in the region drop in and explore this fascinating facility and its heritage.