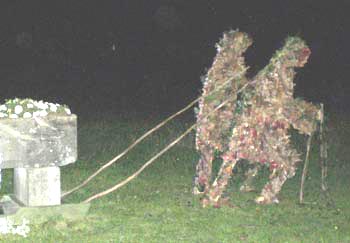 Who are the Friends? Friends promote research, conservation and celebration of the Springs, Spouts, Fountains and Holy Wells of the Malvern Hills and of Great Malvern as a .

Well Decorating 2012 - from out of the gloom at Barnards Green Fountain came the eerie Captain Scott, dragging the trough to celebrate his achievements when in search of the South Pole. This startling spectre was in fact the imaginative well decorating by Team Trough. Perhaps this apparition was lost on the way to the Antarctic, inadvertently arriving on the Malvern Hills? Should the leader now go down in history as Scott of the Malverns! 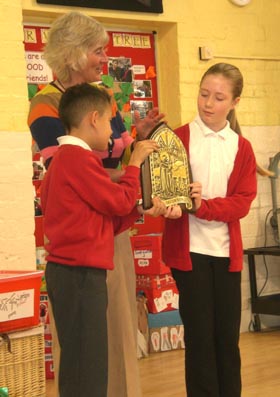 The Founder's Award for well-decorating in 2012 was presented to St Matthias School, Malvern Link for decorating Lord Sandys' Spout. Judge Cora was impressed with many aspects of the decorated well, particularly the interpretation of the theme Achievement. St Matthias pupils interpreted the theme as on-going achievement - achievement of the present and the future. The overall effect was lively and cheerful - the decoration was eye-catching, relevant and absorbing.

This is the first time that the Founder's Award has been presented. In the picture Cora presents the award to Phoebe Collins of Year 5 and Dominic Crutchley of Year 4.  It's an achievement for the school, complementing this year's theme.  The award is a heavy, cast brass plaque and depicts St Werstan, founder of Malvern's first priory in the mid-eleventh century and patron saint of Malvern's springs and wells. He is seen kneeling on the Malvern Hills with a fountain in the background and is surrounded by architectural details from the present Priory Church, flowers of the earth and stars of the firmament.

In the picture - Lord Sandys' Spout decorated in 2012. For a larger picture see the site list at MalvernWaters.co.uk.

Modern day well decorating was founded in 1993 by Cora to celebrate the town's water heritage. Malvern's fame and fortune was built on water. She designated it 'decorating' rather than 'dressing' to distinguish it from the Derbyshire style of well dressing. Since 1993 it has been delightful to see the rapid growth, beauty, and interest in the well decorating. In those early days only 2 prizes were awarded, one to the best W.I decorated water feature and one to 'the others'.  Now there are many prizes but only one Founders Award.

Recently we were alerted to some interesting underground water works at Hillside Cottage. This attractive house stands high in the hills along the West Malvern Road and has a spring water supply. The old Hillside School buildings lay immediately below and again it is known that these buildings have a long history of spring water use. So often when mains water comes along, the old source waters are abandoned 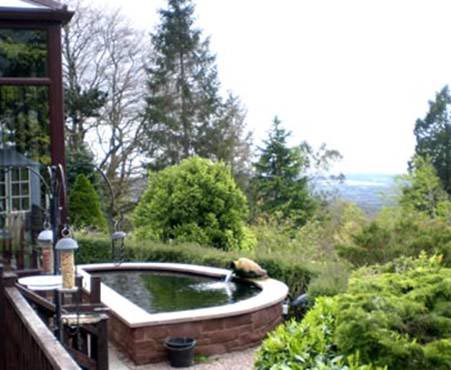 and it is refreshing to see the Malvern water being put to a new good use.

Overlooking the view to the West there is now a high level fish pond and fountain that adds considerably to the overall stunning location and views to be had from Hillside Cottage.

Thought for the Day - Why do you do it?

We were recently asked why Friends put so much effort into springs and wells if we do not make money from them? The answer is that the subject appeals to our intellectual interests, is very social, leaves a lasting heritage legacy for all and is so much fun.

Schweppes began bottling Malvern spring water in 1850, and in 1892 built a water-bottling factory at Colwall. In 1987 the brand and the factory was taken over by Coca-Cola Enterprises. When the factory closed, in October 2010, many local people were concerned about the loss of this unique aspect of Malvern's heritage.  This included the Stone Bottle Fountain located at the entrance to the works.

When it was revealed that the Colwall site would be sold for possible development, Friends of Malvern Springs and Wells, in conjunction with Coca-Cola, had the two and a half ton fountain removed to a safe location outside Malvern, while a suitable alternative site was found for it. In 2011, The Friends, working with Malvern's Three Counties Showground management, Alchemy Gardens and DK Masonry, ensured a permanent site in a rustic garden designed by Paul Taylor of Alchemy Gardens. Paul's purpose made garden is just inside the main south gate at the showground.

On Thursday 10th May 2012, the bubbling, floodlit fountain was once again on display, in time for the Malvern Spring Gardening Show Gold Day. The fountain and its accompanying plaque were unveiled by the Bishop of Worcester. Picture - at the unveiling of the fountain and plaque are: L>R The Right Rev. Dr. John Inge, Bishop of Worcester and wife, Dr. Denise Inge; Rob Stilliard, former manager of Colwall Bottling Works

Now the iconic fountain will be seen by hundreds of thousands of visitors, and is a fitting tribute to 160 years of Schweppes Malvern Waters. Picture above: the inscribed plaque and St Werstan Award, the latter originally presented at the Colwall works.

Our plan to reinstate the George Bernard Shaw Mulberry Tree in Priory Park progresses relentlessly. Mulberry Tree code named Bernadette has surprised everyone this year. Last year we put Bernard with her as he appeared to be languishing alone and certainly not thriving as well as his compatriots.  This year Bernadette is now displaying catkin flowers, both male and female. On fertilisation the female clusters will develop into raspberry type fruits, which are deliciously edible.

Bernard is also thriving along similar lines and we are perplexed as to what has brought this about. Is it the fact that the two trees are now together or is it perhaps due to Rachel who cares for them in a secret location?

In the picture Rachel studies the clusters on the Mulberry tree that is now larger than her! We await the day when they will be large enough to reinstate the Shaw Mulberry Tree in the .

For more details of the project see: www.malvernspringsandwells.com

Should we recreate the past or move forward?

Picture - Visitors to the Beacon Cafe in 1897 - plans set out in the Gateway project we believe, create a much better option for visitor services.

A New way to discover

the  springs and wells.

During April we saw the demand for a refreshment facility to replace the Beacon Cafe featured in letters published in the Malvern Gazette. Rather than pursue all the difficulties of installing a facility on the hills we have taken the view that refreshments and other visitor facilities are best sited at the access points, as demonstrated at British Camp. With this in mind we remind readers of the new Gateway project event planned for the Mount Pleasant on Friday 8th June.

This will be a chance to learn about and comment on the future development of new visitor facilities at the Mount Pleasant in the town centre.

The event will start at the front entrance of the Winter Gardens (Malvern Theatres) in Grange Road at 2.30 pm. Then winding its way past many places of interest around Malvern it will proceed to the Mount Pleasant Hotel and the Hills themselves. It will include an optional stroll to 's Well after visiting the Mount Pleasant Hotel at about 3.30 pm for tea and to learn how the hotel will provide a vital Gateway visitor facility in the future. The walk will be conducted by Cora Weaver and Bruce Osborne of Friends of Malvern Springs and Wells. Tickets are three pounds from TIC or pay on the day subject to availability.

For more details see our main web site and do a keyword search for 'Gateway'.